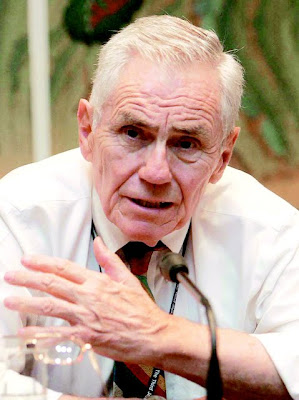 
The following is the text of the interview. Gregg’s responses are taken directly from the interview transcript.


Q: What was the basis for the Russian team reaching that conclusion?

A: Their conclusion was tentative. Because they were not given access to all of the material they wanted to see, and they were not allowed to conduct [simulation] tests.

Q: So doesn't that mean that the Russian team's conclusion was uncertain? How did they reach the determination that it was a mine rather than a torpedo in spite of this?

A: [According to the JIG’s announcement t]he Cheonan sank when it was broken in half all at once by a bubble jet originating from the launching of a torpedo. But, Russia, which is well aware of the situation in North Korea, determined that North Korea didn't access the very high technical weapon to bubble jet, bubble-likely destroy the ship and sink it.

Q: Did the Russian team receive any help from the South Korean government during its investigation?

A: The Russians were frustrated that they couldn't get access to all of the material that they wanted to see, and were not allowed to conduct tests, so they were unable to carry out the investigation. This is also the reason no Chinese investigation team went to South Korea.

Q: Officials with the South Korean government have said off the record that China has not conducted an investigation into the Cheonan because "it doesn't want to know the truth."

A: What I heard from two senior Chinese officials during the past week was that they had been told by Russia that they wouldn't be able to access any information if they went to South Korea, so that there was no need to send an investigation team to Seoul. China took their advice.

Q: Do you also think that the Cheonan's sinking resulted from an accident rather than a North Korean attack?

A: I don't know. But if you look at the situation at the time, North Korea had proposed the third summit, it was preparing U.S.-North Korea talks, and they invited Lee Hee-ho, Kim Dae-jung's widow, to visit Pyongyang. It makes no sense that they would undo all of that by sinking the Cheonan.

A: I am not sure. The South Koreans refused to address technical questions raised by the Russian report, and the South Korean [JIG] report has not been made public. They [the Russians] were not allowed to see some material that might have allowed them to criticize the JIG report more strongly. What I fear is that the final defense of the JIG report will be "It's classified information and we cannot tell you about it." So the truth may elude us, as it did after the infamous Tonkin Bay incident of 1964, that was used to drag us into the abyss of the Vietnam War.

EXCERPTS:
South Korea has not officially referred to the Russian conclusions. When I asked a well-placed Russian friend why the report has not been made public, he replied, “Because it would do much political damage to President Lee Myung-bak and would embarrass President Obama.”

Tension is growing in North-East Asia now that Seoul and Washington are about to
get down to practicing the detection and destruction of North Korea’s sea
targets. The manoeuvres, the second in the last three months, are due in the
Yellow Sea on the 5th through the 9th of September [* postponed due to storm] Pyongyang has described the exercise as a grave military provocation. Beijing says the manoeuvres are a
violent challenge to the situation in the region.