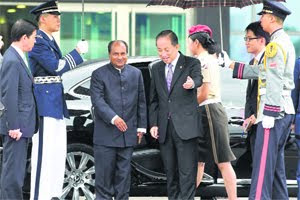 India and South Korea on Friday signed two landmark defence arrangements that envisage joint military training and exercises besides co-development and production of defence products during the first ever visit by an Indian Defence Minster to Seoul. The Memoranda of Understanding (MoUs) were finalised after several rounds of discussions between Defence Minister A K Antony and his South Korean counterpart Kim Tae-young in Seoul.

* Other related articles provided by StopNATO

It will be the first time for India to buy the advance anti- ship missiles from the United States in dozens of years.

Russia has traditionally been India's largest arms supplier but following
evidence of the capabilities of U.S. military equipment during joint exercises
with the Indian army, navy and air force, the Indian army decided to purchase of
several hundred Javelin anti-tank guided missiles, demonstrated during the war
games, the Telegraph reported Friday.