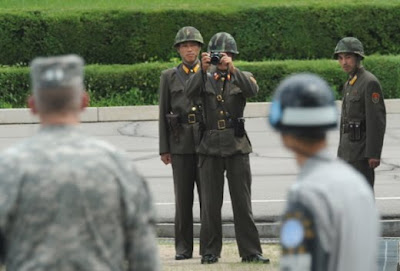 'A North Korean soldier takes pictures of South Korean and UN Command soldiers across the border line at the truce village of Panmunjom on July 27, the 57th anniversary of the armistice agreement. (Yonhap News Agency)'

In its message, the Defense Ministry suggested holding the talks at the Peace House on the South Korean side in Panmunjom on Sept. 30, with the topic of responsible measures from North Korea on the Cheonan sinking as an item on the agenda. On Sept. 15, North Korea proposed holding these talks to discuss pending issues related to the execution of military agreements.

“We made it clear through our message that the issues of responsible measures from North Korea regarding the Cheonan attack, North Korean slander against South Korean authorities, and relaxing tensions around the West Sea Northern Limit Line will need to be discussed at these talks,” a Defense Ministry authority said Sunday. “The North Korean-proposed date for the military talks was too early," he added, suggesting South Korea has essentially agreed to hold the talks.

“The outcome of the inter-Korean military working-level talks will depend on how much of a good faith response there is from North Korea.”

The South Korean government hopes easing the military tensions between the two Koreas in order to host the G-20 Summit successfully in November and ease most South Koreans' complaint tired of the frozen inter-Korean ties.

The talks, if held, would help facilitate a thaw in inter-Korean relations that deteriorated to the worst level in years when both countries began to trade harsh accusations in May over the Cheonan sinking. The South Korean proposal comes two days after Red Cross officials of the two countries met in the North and discussed reuniting families separated by the Korean War.

In addition, the South Korean Defense Ministry will not designate North Korea as a “main enemy” in this year’s defense white paper, a notion reintroduced after six years to deal with growing military threats following the Cheonan incident, a senior military official said.

“The defense white paper will describe the North Korea threat about the same level as last year,” although minor changes were made to describe a recent situation, said the official who asked to remain anonymous.

Meanwhile, North Korea has positioned some two hundred additional 240mm multiple launch rocket systems (MLRSs) north of the military demarcation line over the past year, according to military sources. These MLRSs, which can fire 12 rockets or 22 shells at a time, have a range of 60km, putting the greater Seoul metropolitan area within firing distance of an MLRS fired near the military demarcation line.

“Last year, North Korea put another 200 of its 240mm MLRSs near the military demarcation line,” a military source said Sunday. “According to South Korean and U.S. intelligence authorities, there are a total of around 5,300 North Korean MLRSs in battle position.”

North Korea is also known to have added 2,100 pieces of field artillery and around 300 tanks over the past year, bringing the totals possessed by the country to approximately 10,600 and 4,200, respectively.

This year’s defense white paper will not describe North Korea as the “main enemy” despite the sinking of the frigate Cheonan in March, an official at the Ministry of National Defense said Monday.

But the biennial defense report will depict the North as posing a grave threat to the security of the South, the official said.
Posted by NO Base Stories of Korea at 7:25 PM