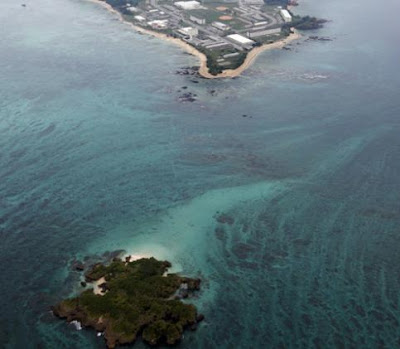 Image & source:same as the link

'The U.S. Marines' Camp Schwab, which dominates the coral reef headland in Nago on the Japanese island of Okinawa'

The Independent
Islanders Prepare for Second Battle of Okinawa

American bases seized from Japan in 1945 have been a cause of bitterness since the Second World War. David McNeill meets the locals and the US Marines they want out.
Thursday, 10 July 2010

There can be few prettier prime ministerial graveyards: waves from a coral-rich, emerald-green sea lick the sandy shore of a pristine white beach.

A sleepy fishing village pokes through the humming tropical green in the background. Dolphins and the endangered dugong sea cow swim in the local waters. Only a razor-wire fence and signs warning of the threat of arrest by US troops hint at the smell of political cordite.

For over a decade, Henoko beach on Japan's southernmost prefecture of Okinawa has been the site of a battle that has pitted pensioners against government surveyors, corroded relations between Tokyo and Washington and arguably claimed the scalp of Japan's last Prime Minister, Yukio Hatoyama. Locals warn that his successor, Naoto Kan, will follow him to the political gallows if he makes good on a promise to build a US Marine heliport on this picture-postcard beach.

"I think 100,000 people or more will come to stop it," predicts Michio Sakima, who curates a local museum dedicated to remembering the 1945 Battle of Okinawa. "He'll have to send in the army and the riot police and there would be war. There's no way that's going to happen."

Okinawa Prefecture, occupying just 0.6 per cent of Japan's territory, is home to one of the planet's largest concentrations of US military bases.

The Americans invaded in 1945, mounting an attack that left 223,000 Japanese soldiers and civilians dead – roughly a quarter of the local population – and 50,000 US troops killed or injured. In 1972, the islands reverted to Japanese rule but most of the bases stayed. Today they occupy nearly a fifth of the main island and include Kadena, the biggest and most active US Air Force facility in East Asia and Futenma, which occupies the centre of Ginowan city. Many of the soldiers train for combat in Afghanistan and Iraq. Local people like Mr. Sakima call these bases war spoils and want them returned. "It makes me very angry when I think what we could do with all that land," he says from the roof of the museum, which overlooks Futenma. His voice is occasionally drowned out by the drone of the giant transport planes that fly in and out of the base.

As he admits, however, while "most" Okinawans are against the US presence, many are financially tied to it. The bases reportedly employ over 8,000 local people and the central Tokyo government has pumped an estimated 200-340 billion yen a year for the last three decades mostly into island construction projects in an attempt to smooth the friction that comes with living beside over 20,000 often battle-scared young soldiers. In 1995 that friction climaxed with the gang rape of a 12-year-old girl that sparked the largest protests in the prefecture's history.

After years of promises to scale down the military presence, the protests finally extracted a promise from Tokyo and Washington to close Futenma. But the plan eventually hatched by the two sides – largely shutting out Okinawa – simply shifted the functions of the aging facility to the coast off Camp Schwab base near Henoko in the sleepier northern half of the main island. In 2006, the deal was inked: a giant seaport, with an 1800-meter runway, would be built off Okinawa's pristine coastline – all paid for with Japanese taxes.

For many Okinawans, the deal compounded an epic sense of unfairness. The prefecture, which wasn't even historically part of the nation until 1872, hosts 75 per cent of all US military facilities in the country. That arrangement on an island hundreds of miles from the mainland means that about 99 per cent of Japanese never need to face the consequences of the country's half-century military alliance with Washington, or its central conundrum – a war-renouncing nation sheltering under the world's largest nuclear umbrella.

Tackling that contradiction would mean debating much of Japan's postwar defence architecture, including its 1947 "pacifist" constitution, a huge can of worms that few politicians have ever shown the stomach for – on the issue of cost alone, one estimate is that Japan's five thousand billion yen defence budget would need to increase by 10 per cent annually for a decade. It would also mean confronting Washington over its claims that the bases are needed to defend Japan, claims that many on Okinawa reject.

"We were told that the bases were protecting us, but few here believe that now," says Mao Ishikawa, an Okinawa-based photographer. "Soviet Russia is gone, we're friendlier with China and North Korea is a powerless country. Everybody knows the bases are for America's convenience. The soldiers train here for war in Iraq and Afghanistan – that has nothing to do with us."

Last September, the prefecture thought they finally had a leader in Tokyo who might recalibrate the military scales when Yukio Hatoyama was elected Prime Minister, ending over half a century of rule by Washington's staunch Cold War allies the Liberal Democrats. Before taking office, Mr. Hatoyama had openly called for the US bases to be ejected from Japan. He promised to reject the 2006 deal and shift Futenma out of the prefecture.

Instead, under pressure from President Barack Obama himself, he embarked on a long tortured journey back to square one. When he finally told Okinawa in May that the 2006 deal would stand after all, they were furious, recalls Doug Lummis, a former US marine and now political scientist who lives on the island. "He had got their hopes up," he says, pointing out that last April the islanders staged an even bigger protest than they did after the 1995 gang rape. "Hatoyama should have learned from Machiavelli: 'If you're going to do something very unpopular you ought to do it straight away.'"

Hatoyama's bungling on Futenma lost him his government's coalition partner and a huge store of political credibility. He resigned in June, leaving Futenma in the hands of his wilier successor Naoto Kan. "This is only the second time in postwar Japan that a popular grassroots movement has brought down a government," says Lummis, alluding to the fierce protests over the 1960 US-Japan Security Treaty that precipitated the resignation of Prime Minister Nobusuke Kishi. "Something has changed here."

Kan – who, as a citizen's activist, once protested against the American bases himself – inherits this hornet's nest but has been careful so far not to stir it up. Last month he visited the island to commemorate the 65th anniversary of the Battle of Okinawa, apologising "as a representative of all Japanese people" and promising to "ease the burden" of hosting the bases. Okinawa's contribution has helped secure the peace and stability of the Asia-Pacific region, he added. He faces an election this weekend that will show how badly damaged his Democratic Party has been by the Okinawa affair and determine if he can go ahead with the base. But nobody can see how his dilemma can be resolved. Voters in Nago, the nearest administrative city to Henoko, this year elected the virulently anti-base politician Susumu Inamine as mayor. Newspaper polls put opposition to the base as high as 80 – 90 per cent. But in a Henoko shop where the prices are in dollars and yen and young Jarheads from Camp Schwab shop for cigarettes and beer, owner Masayoshi Kyoda says the town needs the US money: "Emotionally, everyone is against the bases but the reality is a bit different."

Doctors blame the influx of Americans – and the roughly 100 fast-food outlets that cater to them on Okinawa – for bringing chips, burgers and fatty food to the local diet, which was historically rich in fish, soybeans, vegetables and pork. Okinawans have one of the longest life expectancies in the world at 86 for women and 78 for men, but younger's islanders are growing unhealthier under the US influence.

On the beach nearby, a small group of mainly elderly activists and students stand guard over a permanent protest outpost, marking the time since their watch began: 2253 days.

"People here are furious that the Hatoyama government let them down," says Tomohiro Inafuku. "It seems whoever is in government the result is the same."
Posted by NO Base Stories of Korea at 10:11 AM