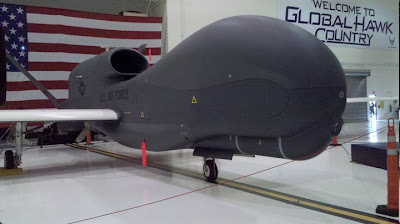 Guam-Andersen Air Force Base officially unveiled the first Global Hawk to be deployed at Andersen Monday. It is an unmanned intelligence surveillance and reconnaissance aircraft.

The Air Force says that 2 more Global Hawks will eventually be deployed to Andersen. Another arrives later this year and the third early next year.

The Global Hawk has a wing span of 116 feet and a range of 9500 nautical miles. It can fly at an altitude of 60,000 feet and remain in flight for 30 hours. The Air Force says that expands mission capabilities because it frees them from the need to change out flight crews. Flight controllers on the ground can be easily switched out while the Global Hawk is still in the air.

The Air Force 9th Operations Group Detachment 3 at Andersen will launch and recover the aircraft while the bulk of missions will be controlled by pilots at Beale Air Force Base in California.

Pacific Air Force Commander General Gary North says "The intelligence and information gathered can be instantly be downloaded to the distribution ground station to be processed, exported and disbursed intelligence officials who are responsible for making important real time decisions."

Although the media might refer to the Global Hawk as a "drone" North disagrees with that term. He says there is always a "pilot" in control on the ground, while the aircraft is in the air. North says there has been an evolution from the historical drones used years ago, which are now being replaced by the kind of technology embodied in the Global Hawk.

When asked if the Global Hawk was brought to Guam to monitor China and North Korea, General North said "there's no one key country we are watching."

"If you look at the map of the Pacific," said North, "Guam is in the perfect location for this platform. You can fly in any direction, north, south, east or west and the Global Hawk can give us the capacity to execute humanitarian or military missions in this region."