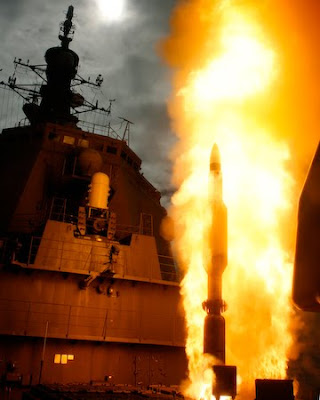 Would South Korea fall down into a ‘swamp of MD’?
Cheong Wooksik
Representative of Peace Network
Oct. 25, 2010

South Korea is in fact, being incorporated into the Missile Defense system initiated by the United Stats. Following the large deployment of US MD system such as the most advanced PAC-3 and radar in South Korea during the Roh Moo Hyun- Bush period, the speed of her enrollment [into the US MD system] is being rapidly accelerated under the Lee Myung Bak administration.

Kim Tae-Young, Minister of National Defense, caused the recent controversy. During a National Assembly’s government affairs audit on the Ministry of National Defense on Oct.22, upon the question by Shin Hak-Yong, National Assembly member, Democratic Party, which was whether it had been the condition for the ROK to join the US-demanding MD when the ROK and US had agreed upon the installation of the ‘Extended Deterrence Policy Committee’ at the time of the Security Consultative meeting (SCM), [the Minister replied] on his question that “We are examining the MD issue together, too.”

Following it, Minister Kim said, “The thing to be a little considered is why our people have denying response on the MD. It is because the United States created the MD to protect the United States' homeland. Now it is changed and [the need of MD] is regionally considered. So it became a little different from the past and [we] are prudently considering it." [His] remark was sufficient for the people to have the suspicion that the Lee Myung-Bak government is stepping on the process of joining the MD.

As the controversy became bigger, the Ministry of National Defense began to explain it in a separate material on [Oct.] 23. It stated that, “The both authorities of the ROK and US would discuss on the sharing information and operating measures to protect the Korean peninsula from the North Korean threat of the Weapons of Mass Destruction within the ‘Extended Deterrence Policy Committee’ in the future.” Despite that, he claimed that, “ It does not mean that we join the regional MD of the United States, but that, while we establish the Korean Air and Missile Defense (KAMD), primarily for the subsystem defense, we will also strengthen the cooperation in sharing information and operating usable assets to effectively respond to the North Korean ballistic missile threat, with the United States Forces of Korea (USFK).” In a word, what it means is while it strengthens the MD cooperation with the United States, it is not the participation in the MD initiated by the United States.

However, such explanation by Lee Myung-Bak government can be said, in a word, like ‘covering the sky with the palm of hand.’ Even though he is nominally denying the joining the [US] MD, the symptoms of [South Korea] being virtually and more deeply incorporated into the MD can be grasped here and there.

Related to this, it is needed to notice on the remarks by Frank Rose, Deputy Assistant Secretary of State, Bureau of Verification, Compliance, and Implementation. Through his speech in Tokyo in the latter September 2010, he expressed his strong will on the establishment of the Missile Defense in the Asia region. Calling that, “In Asia, Japan and South Korea are already important missile defense partners,” he emphasized the necessity of the cooperation by multiple parties that goes beyond bilateral cooperation. It is very unusual that a high-ranking officer mentioned South Korea along with Japan as “already important missile defense partners.”

Rose, Deputy Assistant Secretary of State, claimed that multiple access including South Korean’s is important for three reasons. “Political” because it would strengthen the joint response ability against enemy threat, “operational,” because it would increase the MD operation ability in the way of sharing data and interception missile, and “budgetary,” because it would reduce the overlapped investment among the MD alliance countries and establish the cost-saving MD.

As if proving his remarks, South Korea and the United States have staged the joint MD exercise. The both countries’ navies carried out the joint missile interception drill in early July 2010. It is said that the Sejong the Great, the South Korean Aegis Destroyer traced an enemy ballistic missile and provided the U.S navy with its position information, and then the U. S. Aegis Destroyer launched a SM-3 missile and shoot it down. It is because, while the Sejong the Great has the ability to detect and trace the launch of a ballistic missile, it is not outfitted with SM3. In other words, sharing of information and operating of available asset have been already being done. In reference, the interceptor missile that is outfitted in the Sejong the Great is SM-2, which is primarily used for the interception against enemy’s cruise missile and aircraft.

There is a more thing to be noticed in the remarks by the personnel of the Ministry of National Defense, including its Minister, Kim Tae-Young. It is the claim that, while the reason for South Korea to join the [US MD] was not big in the past when the US MD was for the protection of the homeland of the United States, [now is the time for South Korea] to strengthen the cooperation with the United States as [the MD] is being changed into the ‘regional MD’ under the Obama administration. [The claim] thus goes further to justify the connection between the KAMD and the US regional MD. However it does not fit into facts.

First of all, the regional MD that the Obama administration advocates is the same concept with the Theater Missile Defense (TMD) that was driven under the Clinton administration. The Clinton administration dividing the MD with the TMD that was for the overseas United States military & its allies, and National Missile Defense (NMD) that was for the protection of the US's homeland, has requested South Korea to join the TMD. However, the Kim Dae-Jung government expressed its unwillingness [to join it] considering its tremendous cost & performance imperfection, and inter-Korean & neighborhood relationships. In other words, the TMD that was a ‘regional MD,’ existed in the past and South Korea chose not to join it considering her national interest.

It was the Bush administration that named the MD integrating the NMD and TMD then converted it to the ‘global MD.’ However, the distinguishing between the NMD and TMD in the matters of system and operation has not disappeared. The NMD that was for the protection of the US homeland, changed its name to the Ground-based Midcourse Defense (GMD) and the TMD applicable such as PAC-3, Aegis Ballistic Missile Defense (ABMD) & Terminal High Altitude Area Defense (THAAD) have been continuously developed, produced, deployed and operated.

The Obama administration that came into power after [the Bush administration] estimated that, while the GMD was accompanied with tremendous cost, its performance had not been proven but rather caused the negative influence to the negotiation on the nuclear arms reduction, inducing the repulsion from Russia. It also considered that the threat of the intercontinental ballistic missile (ICBM) from North Korea or Iran that the United States faced was not imminent. Therefore, the Obama administration adjusted its speed on the GMD, and resurrected the concept of the TMD during the Clinton administration, with the name of the ‘regional MD.’

The reason that Obama preferred the title of the ‘regional MD’ was because he thought it would be far easier for his allied countries to join and to share its cost and role. Seeing in that context, it can be said that the Lee Myung-Bak administration became to exactly be involved into the intention of the Obama administration by its attitude that shows far more favorable response to the ‘regional MD.’