Pan Korean movement for Peace, love, and unification!
Not for the absorbing unification by military power! 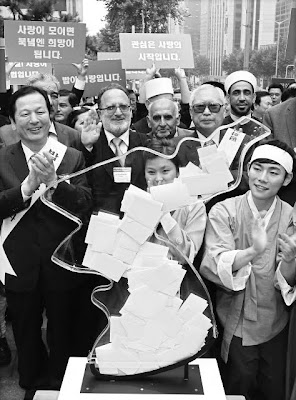 'South Korean civic organizations hold the inauguration ceremony of the National Campaign Headquarters for Collection of Peace Rice and collect written pledges of rice donations in container in the shape of the Korean peninsula in front of the Renaissance Seoul Hotel on Monday.
They have called on Koreans and international residents in South Korea to donate 20 kilograms of rice or 40,000 Won ($35.55) per household to help North Koreans, saying, “We cannot look other way from their starvation.”

They plan to carry on their campaign entitled “Rice is Love,” in twelve major cities this month and send one thousand tons of rice collections to North Korea by the end of this year. 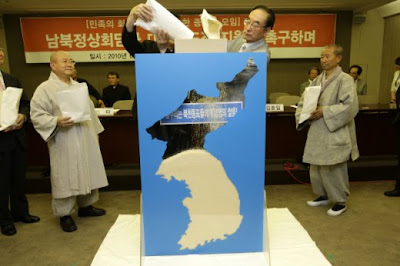 'Coalition calls for rice aid to N.Korea instead of animal feed program.
The rice surplus has led to plumetting rice .'

'Civic and political figure hold signs that read, “Bring peace to the Korean people, bring hope to farmers with unification rice” at the Conference for Sending Unification Rice to North Korea held at the Press Center in Seoul, March 23.
During the conference, participants also urged the government to make changes to its unilateral North Korea policy.' 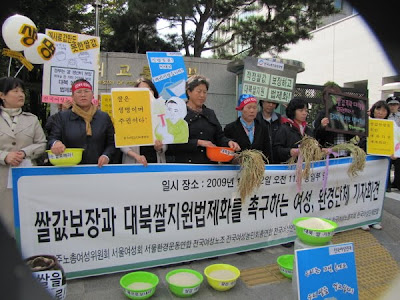 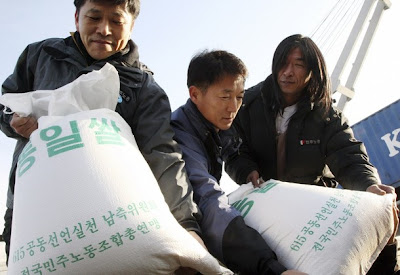 * Image & caption source: Daylife
'Reuters Pictures: Members of the Korean Confederation of Trade Unions (KCTU) and a farmers' group load sacks of rice onto a ship at a port in Incheon, west of Seoul January 8, 2009. The KCTU and farmers' will send total 174 tons of rice to North Korea on Friday by a ship to help the North. Korean characters on the rice sack read,"Unification Rice".
Posted by NO Base Stories of Korea at 9:16 AM