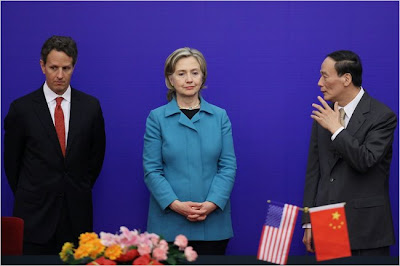 * Image & caption source: same as the below link

WASHINGTON — The Obama administration, facing a confrontational relationship with China on exchange rates, trade and security issues, is stiffening its approach toward Beijing, seeking allies to confront a newly assertive power that officials now say has little intention of working with the United States.

In a shift from its assiduous one-on-one courtship of Beijing, the administration is trying to line up coalitions — among China’s next-door neighbors and far-flung trading partners — to present Chinese leaders with a unified front on thorny issues like the currency and their country’s territorial claims in the South China Sea.

The advantages and limitations of this new approach were on display over the weekend at a meeting of the world’s largest economies in South Korea. The United States won support for a concrete pledge to reduce trade imbalances, which will put more pressure on China to allow its currency to rise in value.

But Germany, Italy and Russia balked at an American proposal to place numerical limits on these imbalances, a step that would have further isolated Beijing. That left the Treasury secretary, Timothy F. Geithner, to make an unscheduled stop in China on his way home from South Korea to discuss the deepening tensions over exchange rates with a top Chinese finance official.

Administration officials speak of an alarming loss of trust and confidence between China and the United States over the past two years, forcing them to scale back hopes of working with the Chinese on major challenges like climate change, nuclear nonproliferation and a new global economic order.

The latest source of tension is over reports that China is withholding shipments of rare-earth minerals, which the United States uses to make advanced equipment like guided missiles. Administration officials, clearly worried, said they did not know whether Beijing’s motivation was strategic or economic.

“This administration came in with one dominant idea: make China a global partner in facing global challenges,” said David Shambaugh, director of the China policy program at George Washington University. “China failed to step up and play that role. Now, they realize they’re dealing with an increasingly narrow-minded, self-interested, truculent, hyper-nationalist and powerful country.”

To counter what some officials view as a surge of Chinese triumphalism, the United States is reinvigorating cold war alliances with Japan and South Korea, and shoring up its presence elsewhere in Asia. This week, Secretary of State Hillary Rodham Clinton will visit Vietnam for the second time in four months, to attend an East Asian summit meeting likely to be dominated by the China questions.

Next month, President Obama plans to tour four major Asian democracies — Japan, Indonesia, India and South Korea — while bypassing China. The itinerary is not meant as a snub: Mr. Obama has already been to Beijing once, and his visit to Indonesia has long been delayed. But the symbolism is not lost on administration officials.

Jeffrey A. Bader, a major China policy adviser in the White House, said China’s muscle-flexing became especially noticeable after the 2008 economic crisis, in part because Beijing’s faster rebound led to a “widespread judgment that the U.S. was a declining power and that China was a rising power.”

But the administration, he said, is determined “to effectively counteract that impression by renewing American leadership.”

Political factors at home have contributed to the administration’s tougher posture. With the economy sputtering and unemployment high, Beijing has become an all-purpose target. In this Congressional election season, candidates in at least 30 races are demonizing China as a threat to American jobs.

At a time of partisan paralysis in Congress, anger over China’s currency has been one of the few areas of bipartisan agreement, culminating in the House’s overwhelming vote in September to threaten China with tariffs on its exports if Beijing did not let its currency, the renminbi, appreciate.

The trouble is that China’s own domestic forces may cause it to dig in its heels. With the Communist Party embarking on a transfer of leadership from President Hu Jintao to his anointed successor, Xi Jinping, the leadership is wary of changes that could hobble China’s growth.

READ MORE
Posted by NO Base Stories of Korea at 2:01 AM