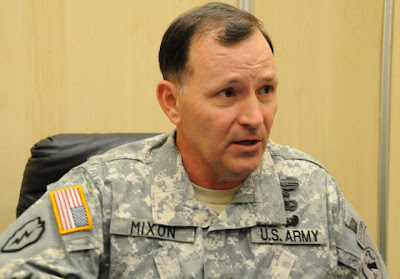 WASHINGTON (Army News Service -- As part of Pacific Integration, Eighth Army in Korea will alter its name next year and fall under U.S. Army Pacific.

"One team, combat ready" sums up Pacific Integration, according to USARPAC Commander Lt. Gen. Benjamin R. Mixon, whose area of responsibility extends from Hawaii to India and from Alaska to Australia, with about 60 percent of the world's population. He spoke with several reporters at the AUSA Annual Meeting and Exposition Oct. 25.

In a nutshell, here's what PI will do: By late summer 2011, the Eighth U.S. Army in Korea -- a sizeable organization with a large sustainment command -- will become the Eighth U.S. Field Army and integrate into USARPAC, Mixon said, "But the reality is that transformation has already been going on now for several years," he said. "It's not like flipping on a light switch. It's a process."

If a conflict were to occur right now on the Korean peninsula, Mixon said Eighth Army would "focus on the fight, which I believe would be intense, while we provide logistical support and additional troops, not only for the peninsula but elsewhere, as it could become a regional conflict. So instead of having two Army service components, we now have one, more capable force."

The PI transition is mostly completed, he said. "We already have overlapping responsibilities with Eighth Army should anything happen."

Growing the force throughout the Pacific is another aspect of PI, that has "been below the radar the last several years," Mixon said. He cited the formation of airborne, squadron, maneuver enhancement and aviation brigades in Alaska and the reorganization of the 25th Infantry Division in Hawaii from a light to a medium division, along with increased manpower there for a stryker brigade, heavy brigade combat team and medium aviation brigade.

To move this beefed-up force quickly around half the globe, he acknowledged, requires close coordination with the Navy and Air Force for ships and transport aircraft.

How does PI bode for America's allies?

"In addition to reinforcing our long-term relations with allies such as Japan, Thailand, Australia and the Philippines, we're reaching out to India, Indonesia, Malaysia and other countries," Mixon said, citing Vietnam as an example where military exchanges are increasing, along with Army medical support.

The general said multilateral, not bilateral exercises with Asian countries, will be the blueprint for the future, citing the example of the annual Cobra Gold exercise in Thailand, where a number of Pacific-rim and other nations participated or observed.

"A greater sharing of intelligence is now occurring," Mixon said, providing an example of improvised explosive device threats, where armies throughout the Asia-Pacific and other areas "share intelligence on the types of IED threats and pass them along to trainers so they can deal with the type being used. We stood up a counter-IED task force a year ago and we're already doing support," he noted. He said there's a real threat of IEDs in India, southern Thailand, Philippines, Indonesia, "and, should war break out, on the Korean peninsula."

In addition to potential for conflict in Korea, there are other areas of concern, he said, noting Abu Sayyaf, an Islamist separatist group in the southern Philippines, known for carrying out terrorist attacks; and more recently, the Islamist terrorist group Lashkar-e-Taiba, based in Pakistan, but active in India, Nepal, Bangladesh and allegedly in the Chicago area, where two of its members were arrested in November.

How will USARPAC interact with China?

"We're hopeful that in the near future we'll have an army-to-army relationship. The 25th ID Band performed in China and Russia and we're hopeful it'll open the aperture a bit," Mixon said. "I'd like to take a trip there myself to talk to some of the senior leadership and investigate how we can work with them."

"Families," he said. "The last nine years have been difficult on Soldiers and Families. Senior leadership is trying to extend dwell time to 18 months to two years. This would allow more time to train, take care of Families, recoup from injuries; we always need more time."