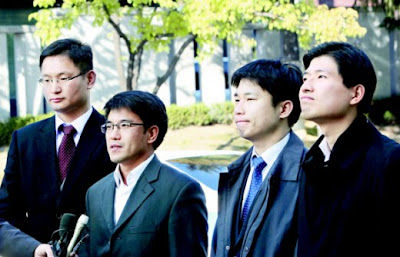 'Dismissed military judicial officers who challenged the military ban of “seditious books” present their position on the ruling in front of the Constitutional Court, Oct. 28 (Photo by Lee Jong-keun)'
Hankyoreh
Defense Ministry retaliates against challengers of book ban
: Military judicial officers dismissed by the government have lost careers in the military, and some have incurred bans on practicing law
Posted on : Oct.29,2010 14:35 KST
By Noh Hyun-woong

The Constitutional Court has ruled the Ministry of National Defense’s designations of “seditious books” to be constitutional. This means that the ministry can prohibit books with content it believes seriously diminishes the armed forces’ spiritual fighting strength. It is regrettable that the Constitutional Court, which should be serving as a bulwark protecting basic rights, has instead given a free pass to a clear violation of those rights.

As the court itself acknowledged, Article 16, Item 2 of the military service regulations, which the ministry took as its basis for designating the books in question, places restrictions on the “right to know.” As a result, freedoms of scholarship, thought, and conscience can also be violated.

Even if a soldier is in a special situation where he or she must have basic rights such as freedom of residence and relocation restricted to some extent compared to ordinary citizens, the rule is that those restrictions should be limited to what is strictly necessary, and that the essential content of basic rights cannot be infringed upon. Guaranteeing basic rights without exception is the beating heart of constitutionalism.
Posted by NO Base Stories of Korea at 8:49 AM