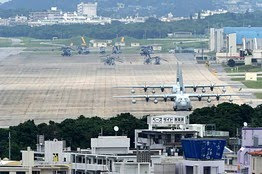 Whither the U.S-Japan security alliance?That’s an eternal question for security policy think tank types who are always on the lookout for the next inflection point.

Indeed, a new report due out Wednesday from the Washington, D.C.-based Center for a New American Security (CNAS) sees the bilateral relationship at a — surprise, surprise — “turning point…amid a strategic environment of unprecedented complexity.” Yet the report also points out the half-century old U.S. Japan Mutual Security Treaty has had a solid track record of helping to keep the peace in the Asia-Pacific region. Among the more provocative suggestions for policymakers: consider pulling back some forward stationed U.S. military forces in Japan and moving them as far away as Guam or Hawaii.

The report, an advance copy of which was obtained by The Wall Street Journal, provides an overview of challenges facing the alliance timed to coincide with the upcoming Asia Pacific Economic Cooperation (APEC) meeting of regional leaders in Yokohama next month. It specifies several areas in need of “revitalization,” including greater interoperability of the two countries’ intelligence, surveillance and reconnaissance (ISR) programs. It also bluntly calls on Japan to create a National Security Council and to boost its arsenal by adding drones (“long-haul, unmanned aerial vehicles”), diesel attack submarines and naval mines. And the report suggests four core options for the U.S. military base presence in Japan:

1.) Retain and Harden: Maintain current base structure and bolster their potency by deploying more missile defenses and “pouring additional concrete on shelters and burying facilities.”

2.) Fortify Guam: Shift more American military personnel from Japan to the island of Guam while building up its air and naval facilities.

3.) Disperse: Spread the U.S. military footprint across more of Oceania by redeploying forces from Japan and improve access to military installations in Southeast Asia.

4.) Pullback to Hawaii: Move some U.S. forces in Japan to Hawaii and upgrade their capability to redeploy quickly during a regional crisis.

The CNAS predicts that it is “likely” the U.S. will implement at least some of these policy options in the future to upgrade their effectiveness and mollify localized opposition to the large U.S. military presence in Okinawa. This comes against a backdrop of a tense standoff between China and Japan recently over uninhabited but strategic islands off the southern tip of Okinawa. That diplomatic tiff has rekindled concerns in Tokyo and Washington, D.C. about the regional balance of power in light of China’s new willingness to throw its weight around. While the report refrains from embracing a policy of containment vis-à-vis Beijing, it does encourage the U.S. and Japan to begin preparations to “counter China’s anti-access and area-denial strategy.” The report was authored by a trio of Asia-Pacific security experts, including Mr. Patrick Cronin, a former director at the National Defense University and senior official at the U.S. Agency for International Development.

On a less militant (and more colorful) note, the think tank report asks both countries to work towards fostering a “blue revolution” to cope with water scarcity, a “green alliance” to deal with natural resource dependence and a “green Okinawa” policy promoting local economic development. To accomplish all of that, CNAS wants to see a so-called “Track 1.5” series of ongoing dialogues for both government and private sector officials in the U.S. and Japan. But the unmistakable undercurrent of the report seems to say: actions speak louder than words, at least on the high seas.
___________________________________________________________

Center for a New American Security
From Wikipedia, the free encyclopedia

Center for a New American Security

The Center for a New American Security (CNAS) is a Washington, D.C.-based think tank established in 2007 by co-founders Michèle Flournoy and Kurt M. Campbell which specializes in U.S. national security issues. CNAS's stated mission is to "develop strong, pragmatic and principled national security and defense policies that promote and protect American interests and values."[1] CNAS focuses on terrorism and irregular warfare, the future of the U.S. military, the emergence of Asia as a global power center, and the national security implications of natural resource consumption. Deputy Secretary of States James Steinberg has called CNAS "an indispensable feature on the Washington landscape."[2] Speaking at CNAS annual conference in June 2009, U.S. Central Command Commander GEN David Petraeus observed that "CNAS has, in a few short years, established itself as a true force in think tank and policy-making circles"[3]

The Obama administration has hired several CNAS employees for key jobs.[4] Founders Flournoy and Campbell currently serve as the Undersecretary of Defense for Policy and the Assistant Secretary of State for East Asian and Pacific Affairs, respectively. In June 2009 The Washington Post suggested, "In the era of Obama...the Center for a New American Security may emerge as Washington's go-to think tank on military affairs."[4] CNAS scholars include John Nagl,[5] David Kilcullen, Andrew Exum, Thomas E. Ricks, and Marc Lynch.
CNAS is relatively small, with around 30 employees and a budget under $6 million.[6] Despite its small size, CNAS is influential within the national security policy community, and has been able to “punch above our weight”, according to former CNAS Director of External Relations and now-Principal Deputy Assistant Secretary of Defense for Public Affairs Price Floyd[7].
Posted by NO Base Stories of Korea at 8:49 AM