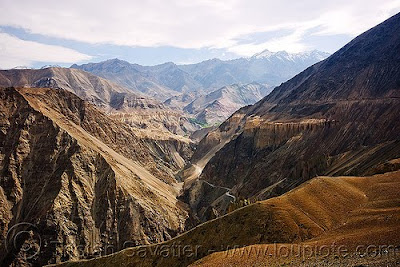 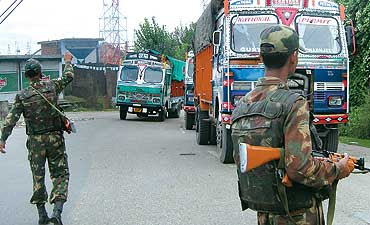 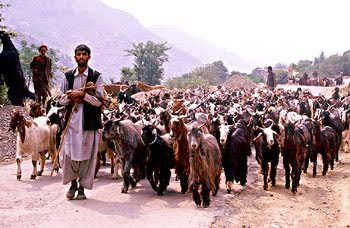 I am in a government guesthouse in Srinagar after a harrowing 10-hour drive from Jammu through the mountains. We were put into a van at 7:00 am, a total of nine people crammed into the vehicle, and we set off through the mountains. The most important thing to know is that this narrow two-lane twisting road was loaded with trucks hauling produce, buses, cars, vans, military convoys, and motorcycles.

Besides sucking more diesel fumes than ever before in my life, it was a constant game of leap-frog as our two drivers (who took turns at the wheel) did all they could to move our van ahead of other vehicles every chance they got. Horns were constantly blowing as drivers attempted to get back into line before a head-on collision happened.

It was not a boring trip. All along the way there was much to see. Monkey families sat on the side of the road watching the show. Shepherds moving their oxen, goats, or sheep were part of the traffic pattern all day long. Once a lone camel walked down the middle of the curving highway causing vehicles to pull to either side of the narrow road.
My favorite site though were the pack horses, heavily loaded, and herded by whole families. I could just imagine that this was how people made their way through these mountains for thousands of years, long before the motor vehicle was created.

To either side of the road were very steep drop-offs and many times I looked out my window to see the tires of the van near the edges of the cliffs. We averaged about 30 M.P.H. throughout the 300-kilometer journey.

Everywhere there were police and military along the highway. Many military bases are sprinkled along the Jammu to Srinagar road. I would venture to say that Army men stood guard by the side of the road at least every quarter-to-half mile from mid-way along the mountain highway until we reached Srinagar. When we came to little villages or bigger towns the military presence surged.
Pakistan and Afghanistan are very near this area. I can see why the U.S. will never "win" the war in Afghanistan....fighting in these mountains against people who know every nook and cranny of them must be an impossibility.

One Army base we passed had a sign that read, “Cut them, kill them, kneel not”.

We saw only two accidents all day long. One truck carrying apples from Kashmir, heading toward Jammu, had run off the road into the gutter and broken its front axle. As we approached Srinagar a car had been sideswiped by another vehicle. It’s really amazing that more damage was not done along the way.

Midway wide rivers formed at the bottom of the huge cliffs, as we got closer to the mountains that surround Srinagar. Also as we neared the end of the trip rice fields were everywhere and migrant farm workers were in the fields harvesting the crop by hand. Their makeshift tents were ever present near where they were working.

Everyone in India seems to have a cell phone. Cell phone companies have painted their ads all along this highway – Tata, Airtel, Reliance, Aircel. Even the poor appeared to be talking on their phones as we drove by.

One last observation – no one wears seat belts in India.
Posted by NO Base Stories of Korea at 12:32 AM