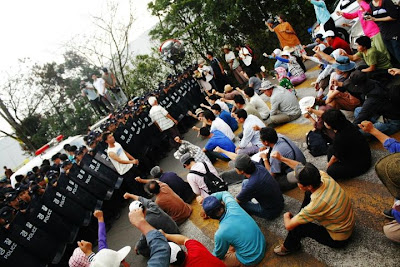 As of Aug. 26, four people including Mayor Kang Dong-Kyun and Fr. Moon Jung-Hyun got prosecutors' decision of restraint against them(Update: Fr. Moon was released around 10pm, Aug. 26)/ The government has indicted 23 people and the others among 70 are under government investigation/ The government held a public security meeting on Aug. 26 in two years to talk about crackdown measure against the protesters in the village/ But people's resistance will be stronger. A peace plane for solidarity with Gangjeong village flies on Sept. 3/ Please come by the below blogs for continuous update! Please spread news and consider what you can do to help people in Gangjeong!
__________________________________________

WHO ARE THEY? 그들은 누구인가?

More photos and words on the three(via Facebook) New!

ENGLISH SITES ON THE STRUGGLE AGAINST THE JEJU NAVAL BASE CONSTRUCTION:

Release Mayor Kang and the others who tried to defend him!(Facebook)
(*Thanks to MacGregor Eddy)

No Naval Base on Jeju

Save Prof. Yang and Sung-Hee Choi

Aug. 26: A Peace Plane will fly amidst the government’s threat of public security state! Solidarity is needed more than ever!

Aug. 25: Three got the restaint warrant! Fr. Moon was arrested, too! The village needs help!

Aug. 24:Gangjeong is in attack! Five including Gangjeong mayor were arrested on Aug. 24!

Collection of the examples of navy & police violence against protesters!

Japan Focus: Back to the Future: Korean Anti-Base Resistance from Jeju Island to Pyeongtaek by Andrew Yeo

Hankyoreh, Aug. 26: Construction, protests and arrests intensify Jeju naval base standoff : With more police and civic involvement, stakes have risen for the base that is unpopular with local residents

Space News: All missile defense programs are part of the same system (July 5, 2011)

Posted by NO Base Stories of Korea at 4:10 AM