Petition: Media and democracy in South Korea: Save Mediact 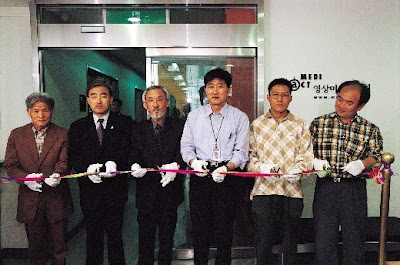 “ A Japanese group for laborers called the Labor Net is asking for petitions for the Korean Media 'MediAct '
http://www.gopetition.com/online/33662.html (English)
http://vpress.la.coocan.jp/mediact.html (Japanese)
http://www.labornetjp.org/Campaign/2010/savemediact

Published by mediact solidarity on Jan 26, 2010

The world has watched as South Korea has moved from dictatorship toward democracy, over the last half a century at great cost. However, democracy, including incredible advances made in the culture and media sectors, has suffered serious damage in South Korea under the Lee Myung-bak regime. This damage has been inflected by way of unilateral passage of new media and news laws, the Grand National Party's (GNP) and conservative newspapers' attempt to take-over of public broadcasting and the evening news in particular, and the replacement of major broadcasting networks' executives with pro-government figure. Furthermore, a principle of checks-and-balances among the executive, the legislative, and the judicial branches of the government has been repeatedly violated and weakened the legitimacy of democratic governance.

South Korea in the past two years has been witness to the use of the Public Prosecutor's Office to detain and question journalists critical of the government, infringing on the professional autonomy of rank-and-file reporters and threatening the development of a free and independent press. In addition, the National Tax Service has been used to mobilize politically-motivated institutional audits, while various ministries have been involved in the revocation of NGO licenses and contracts, forced personnel changes, budget cuts, imposition of a real name registration system, pressing of charges of national security violations, and investigations into family members of media movement activists and cultural sector leaders that have been classified as "Born in the Time of DJ (Kim Dae-jung), and Raised by Roh Moo-hyun."

During the past year there have been several forced resignations and/or illegal firings, many of which the Seoul Administrative Court has determined have been illegal but not reversible. While the list is extensive and include the massive personnel and budget cuts at both South Korea's Truth and Reconciliation Commission and the NHRCK that violates the latter's autonomy outlined and protected under Article 10 of the Constitution, notable incidents include:

There have also been:
* many resignations made under political protest of four MBC Board of Directors members and media personality Kim Je-dong
* the parachute appointment of the YTN president
* the defunding of Migrant Worker TV
* the defunding of the Seoul Human Rights Film Festival hosted by Sarangbang
* defunding of RTV (national public access satellite cable channel/ a must-carry channel that launched in 2007)
* an attack on Article 38 of the Broadcast Law stipulating that funds are to be used for supporting viewer-produced programs and providing broadcast access to those otherwise excluded from the mainstream
* shut-down of Indie-Space

These and numerous other instances that suggest consequences of a democracy that is taking backward steps in South Korea have been drawing international attention, including from:

We now join those concerned over the regression of democracy in South Korea that has now taken the form of an attack on Mediact, South Korea’s first public media center that has since its founding represented South Korea internationally as a leader in communication rights and democracy, media literacy, intellectual property rights, and public interest media.

Since 2002, Mediact has stewarded a contract to support independent film and video makers, media policy development, lifelong media education and public access. For seven years, it has provided an infrastructure focusing on the potential of creating a public media sector based on both shifting technological possibilities of access to the media and ongoing political democratization processes taking place in South Korea.

Mediact’s facilities are funded by the Korean Film Council (KOFIC), what is supposed to be an autonomous organization funded by the central government to promote Korean cinema within the country and overseas, and an independent activist organization managed by the Association of Korean Independent Film & Video (KIFV). We are highly alarmed by the new KOFIC Chairman's recent decision to dismantle Mediact and force its staff to resign as of February 1.

As Mediact’s counterparts in the international community, we have been long inspired by Mediact’s visionary leadership in the areas of media policy, media education, media production and communication rights. We, the undersigned, urge the government of President Lee Myung-bak to recognize its responsibility for the democracy that has regressed and reorient itself as a government that respects the people's sovereignty and South Korea's continued leadership in media and communication rights. We ask KOFIC together with the Ministry of Culture, Sports and Tourism to reverse this decision immediately.

http://nobasestorieskorea.blogspot.com/2009/05/text-fwd.html
Friday, May 22, 2009
Text Fwd: Government announces a ban on assemblies in Seoul
Posted by NO Base Stories of Korea at 8:47 PM