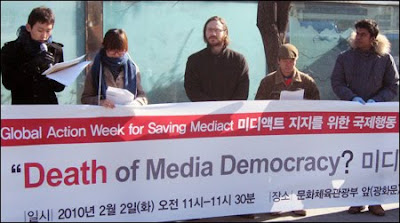 The Media Center, opened in 2002 and located on the fifth floor of the Ilmin Museum in Gwanghwamun, is a public cultural organization offering media education programs.

"We helped citizens to communicate socially though video clips, educated them about the media and rented out resources," said a representative of Mediact, the center's former operator.

The Korean Film Council (KOFIC) funds the center's operation and selects the operator. When it opened, the Association of Korean Independent Film and Video (AKIFV) established Mediact and was given operational control of the Media Center after signing a contract with the council.

However, in April last year the Board of Audit and Inspection ordered the AKIFV to pay back the subsidy that was provided to Mediact for 2008 to 2009, alleging a misuse of funds. Additionally, KOFIC opened the operating contract to public bidding instead of renewing its contract with the AKIFV.

The Citizen's Video Cultural Organization (CVCO) was selected as the new operator, despite Mediact's claims that it had done nothing wrong.

Observers suspect that the change was part of the government's efforts to bring a more conservative tone to the nation's media sector.

The CVCO was established on Jan. 6 this year and is headed by Prof. Kim Jong-kuk of Hongik University, who also works for the conservative "New Right" cultural organization, Cultural Future Forum.

Mediact claimed the selection was a setback to media democracy in Korea and filed an online petition titled "Media and Democracy in South Korea: Save Mediact." Across the world, 600 people had signed the petition as of Tuesday. They submitted the petition to the culture ministry and the KOFIC.

Mahbub Alam, a Bangladeshi actor who starred in the Korean movie "Bandhobi" last year, supported Mediact at a press conference in front of the Ministry of Culture and Sports and Tourism, Tuesday.

"Independent movies are a place that allow for minorities to communicate, not only those who have money and power," Alam said. "I want to create a media education program in my home country and Mediact is a role model."

KOFIC Chairman Cho Hee-moon rebutted any suggestion of ideology in changing the contractor. Cho is considered a conservative figure in the movie world and worked for the presidential transition committee of current President Lee Myung-bak.

He said most applicants for the operator position were newly founded organizations and the KOFIC went through the proper selection process at a press conference Monday. Cho said he couldn't renew the contract with Mediact since it was suspected of misusing the subsidy.

"The core of the suspicion is why Mediact was eliminated and how trustworthy the new organization is. Our efforts to choose the best operator have been ignored," Cho said.

Mediact refuted Cho's remarks, saying they were contradictory as the KOFIC considers Mediact to be a newly established organization while recognizing its connection to the former operator AKIFV.

Posted by NO Base Stories of Korea at 9:09 PM