Text Fwd: Kim Tae-Young, Minister of National Defense, “[We] Would Have the Ceremony for Starting to Work on the Jeju Naval Base in March.”

* Below is arbitrary translation of the linked article 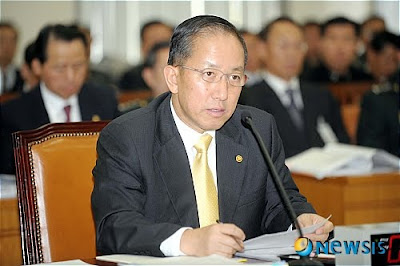 Sisa Jeju
Kim Tae-Young, Minister of National Defense, “[We] Would Have the Ceremony for Starting to Work on the [Jeju Naval Base] in March.” :
The Navy Explains It Means, “The Setting to Work Would Be Naturally Started as the Related Procedure for Permission Would be Finished by Then”
Feb. 24, Wednesday, 2010
Kang Soo-Jung reporter (kkangsoo83 (at) sisajeju.com)

Kim Tae Young, the Minister of the National Defense Department, announced that, related to the Jeju naval issue construction, “ [the Dept.] would have the ceremony for the starting to work in Match and would complete it by 2014.

According to Yonhap news report, Minister Kim, speaking on the issue related to the Jeju naval base, in his special lecture by invitation from the Marine Strategy Research Institute, ROK, in the War Memorial museum, Yongsan, Seoul on Feb. 24, “ Even though many classes are still opposing it, [we] would have the ceremony to start the work in March and complete by 2014.”

The Yonhap news reported that Minister Kim saying, “The Jeju naval base is essential for strengthening the control ability on the southern area”, told “If the base is set up, it could become the tremendous special benefit to the Jeju Island People, such as population being increased by 10,000 and the economy being vitalized.”

Otherwise, the Jeju Island has announced its measure that it would send an opinion to the government so that the ceremony to start work on the Jeju naval base construction business, which had been planned on Feb. 5, in the beginning, could be processed after all the finish of the administrative lawsuit and administrative procedures.

Related to above, Park Sung-Su, the Lieutenant Colonel of the Jeju naval base construction business, elucidated that, “ [The Minister] was meaning the concept of rather than ‘the ceremony to start the work’, of his [rough layout] that the procedures for the reclamation of the public water or for the permission related could be finished then and the setting to work could naturally be started [by the time].

Otherwise, Jung Ok-Keun the [soon-to be-retired] Navy Chief of the Joint Staff, who has visited the Jeju Island and met Kim Tae-Hwan, the current governor and [who has recently announced his non-running for governor’s office, for June 2 election, said [the military] would hear the opinion of the Island people and deliver [people’s] difficulty to the higher offices, and he would agonize with the Island people.”

[He had the secret meeting with the Jeju Governor on the day.]
Posted by NO Base Stories of Korea at 11:11 PM