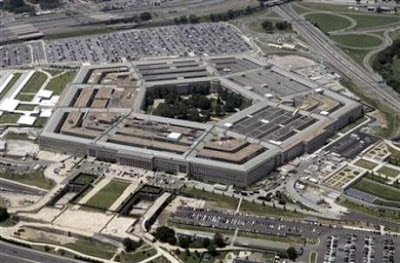 * Image source: same as the link below

WASHINGTON (Reuters) - President Barack Obama on Monday asked Congress to approve a record $708 billion in defense spending for fiscal year 2011, including a 3.4 percent increase in the Pentagon's base budget and $159 billion to fund U.S. military missions in Iraq, Afghanistan and Pakistan.

The White House budget request also included $33 billion in additional funding for fiscal 2010 to pay for increasing military and intelligence operations in Afghanistan and Pakistan, and drawing down U.S. forces in Iraq. That comes on top of $129.6 billion already provided for the current fiscal year, which ends September 30.

The Pentagon's base budget request of $549 billion is up $18 billion from $531 billion in fiscal 2010, and will pay for continued reforms of defense acquisitions, development of a ballistic missile defense system and care of wounded soldiers.

The budget also calls for cancellation of several major weapons programs, including Boeing Co's C-17 transport plane, saving $2.5 billion, and a second engine for the Lockheed Martin Corp F-35 fighter jet, saving $465 million in fiscal 2011 and more than $1 billion longer-term. The White House tried to kill both programs last year, but lawmakers revived them during the budget process.

The second engine is being developed by General Electric Co and Britain's Rolls-Royce as an alternate to the main engine built by Pratt & Whitney, a unit of United Technologies Corp.

The proposed budget also kills plans for development of a new Navy cruiser, scraps plans to replace the Navy's EP-3 intelligence aircraft and halts work on a missile early-warning satellite, opting instead to upgrade the Space Based Infrared System satellite already being developed by Lockheed.

The budget proposal also calls for a delay in replacing two new Navy command and control shops until after 2015, a move the White House said would save $3.8 billion across the Pentagon's five-year defense plan. The Navy had planned to buy one command ship in 2012, and a second one in 2014.

Procurement of a new amphibious vehicle being built by General Dynamics Corp for the Marine Corps would be delayed by one year, saving $50 million in fiscal 2011 and cutting risk by allowing more time for testing.

The Pentagon also said it would further reduce its use of high-risk contracts in areas that related to time, material and labor hours by 17 percent through the end of 2011.

The budget underscored the administration's commitment to a "robust defense against emerging missile threats," saying it would pay for use of increasingly capable sea- and land-based missile interceptors and a range of sensors in Europe.

The Pentagon's budget continues to fund new weapons already under development, including the F-35 fighter, a new ballistic missile submarine, a new family of ground vehicles and the P-8 surveillance aircraft built by Boeing.