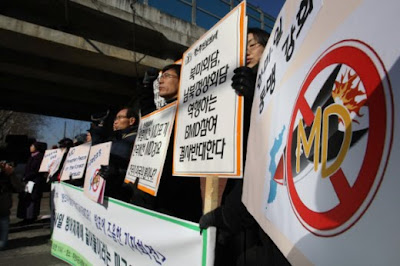 * Image source: Hankyoreh, same as the below article

Members of civic organizations including the Solidarity for Peace and Reunification of Korea, Korea Alliance of Progressive Movements, and Korean Confederation of Trade Unions] hold a demonstration to oppose the U.S.-led missile defense (MD) system that would include South Korea in front of the headquarters of United States Forces Korea (USFK) located in Seoul’s Yongsan district, Feb. 5.

South Korea and the U.S. have been expressing divergent positions over the past few days regarding sensitive foreign policy and national security issues, including provisions for a potential upheaval in North Korea and participation in the U.S.-led missile defense (MD) system. In response to media reports that senior U.S. military officials proposed joint South Korea-U.S. training exercises in preparation for a possible North Korean upheaval, the Defense Ministry denied Friday that the U.S. made any proposal. In addition, after a U.S. Defense Department official said that discussions were taking place over the scope and level of South Korea’s participation in the MD plan, the South Korean Defense Ministry strenuously denied that such discussions were taking place.

The response from the Defense Ministry is exceptional, in that it has generally adhered to an NCND (no confirmation, no denial) approach on sensitive issues of national security and foreign policy. For this reason, some analysts are suggesting that the ministry is attempting to put out the fire to avoid provoking North Korea, in the hopes of making headway with an inter-Korean summit.

Proposed Exercises in preparation for a North Korean Upheaval

It was reported Thursday by certain media outlets that U.S. Chairman of the Joint Chiefs of Staff Mike Mullen and U.S. Forces Korea Commander Walter Sharp were confirmed to have made a proposal to South Korean authorities to hold joint South Korea-U.S. training exercises in preparation for a possible upheaval in North Korea. Possible scenarios included the death of North Korean leader Kim Jong-il, a military coup, an uprising by North Korean citizens, a large-scale defection situation, natural disasters such as flooding, a hostage incident involving a South Korean national within North Korea at a location such as the Kaesong Industrial Complex, and the leaking of weapons of mass destruction such as nuclear devices.

At a briefing Friday, Defense Ministry spokesman Won Tae-jae said, “There is currently no OPLAN 5029 predicting an upheaval in North Korea, and therefore no exercise could be taking place because there are no exercise scenarios.” Won added, “We have also never received any proposal from the U.S. to hold exercises in preparation for a North Korean upheaval.”

Jang Yong-seok, research director at the Institute for Peace Affairs, said that the Defense Ministry’s rush to deny such exercises could be connected with the recent attempts to pursue an inter-Korean summit. North Korea objected strongly in mid-January when it was reported in the media that the South Korean government had drafted an integrated emergency plan in preparation for a North Korean upheaval. Jang said, “It is natural for the government to prepare internally for a North Korean upheaval, but if the related content leaks to the outside, the result is that the foundation for inter-Korean dialogue crumbles and the dialogue itself is repudiated.”

Participation in the Missile Defense Plan

During Friday’s briefing, Won Tae-jae also said, “Claims that South Korea and the U.S. are engaged in discussions on the missile defense plan are contrary to the facts, and there has been no change in South Korea’s position on MD.” Won stuck to the current cautious approach, saying that the issue of South Korea’s participation “needs to be examined in the long term in consideration of all the factors, including the security of the Korean Peninsula and the international situation.” The previous day, Peppino DeBiaso, director of the U.S. Defense Department’s Office of Missile Defense Policy, said that discussions have been taking place on a proper role for South Korea in the missile defense plan within the security structure of the U.S. and South Korea.

While South Korea is interested in a low-level “South Korean” form of missile defense to block the threat of North Korean missiles, the U.S. is asking for its participation in high-level defense targeting long-range missiles, including the threat of those coming from China. The two sides have been unable to bridge their differences on the issue. Conscious of possible Chinese objections, South Korea has not responded readily to U.S. proposals.

A national security expert who asked to remain anonymous said, “The U.S. is asking South Korea to enter the missile defense plan the country devised itself, but it is coming across as if South Korean and U.S. authorities are experiencing discord or differing ideas in the communication process.” The expert added, “Since the missile defense plan and the exercises to prepare for a North Korean upheaval are not likely to be accepted when South Korea is hoping to hold an inter-Korean summit, they have to maintain a strategic ambiguity.”

http://nobasestorieskorea.blogspot.com/2010/02/text-fwd-united-states-stop-enforcement.html
Saturday, February 6, 2010
Text Fwd: United States, Stop the Enforcement [of South Korea] to Join the MD System!
Posted by NO Base Stories of Korea at 10:43 PM