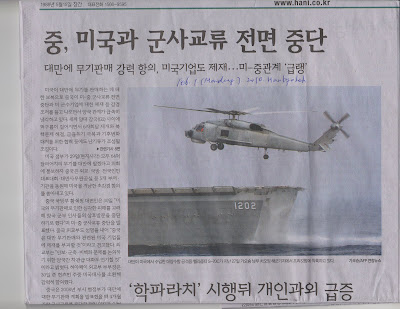 * Image source: The Hankyoreh newspaper, Korea on Feb. 1, 2010 made the headline of the worsened relationship between the China and United States due to the U.S.' arms sale to Taiwan

The headline title says, “China, Totally Poses the Military Exchange with the United States:
[China] Strongly Protests of the Arms Sale to Taiwan.. The Relationship Between the U.S. and China Becomes Suddenly Frozen.”

The subtitle under the photo describes the S-70, a submarine based attack helicopter, imported by Taiwan from the United States(photo resource: Gao Shoong, AFP)

-"Washington reaches out one hand to beg for Beijing's support in Afghanistan, Korea and for chasing pirates in the Indian Ocean. But with the other, the US continues to provide military aid to Taiwan and key allies in the Pacific. As long as the American stick to their military presence in China's periphery, they should not expect China to behave as a partner." -"America also continues to see the Taiwan Strait as its first line of defence. In many ways, support for Taiwan is a matter of demonstrating that the US is still a resident military power in Asia...."
A $6.4-billion (4.6-billion euros) arms deal between the United States and
Taiwan has enraged China and threatens to endanger cooperation between
Washington and Beijing on key international and regional issues.

The Pentagon's approval last week of the sale of Patriot missiles, Black Hawk
helicopters, mine-hunting ships and other weaponry to Taiwan prompted China's
state-run media to accuse the US of "arrogance" and "double standards."

The China Daily newspaper, run by the People's Daily, the Communist Party's
propaganda mouthpiece, said that the US move "exposes the Americans' usage of
double standards and hypocrisy on major issues related to China's core
interests."

"It's time the US was made to feel the heat for the continuing arms sales to
Taiwan," said the newspaper.

Beijing's response has been just as furious, with the Chinese government issuing
threats that US companies involved in the deal, including aircraft manufacturing
giant Boeing, would be hit with sanctions and that military and security
contacts with Washington would be suspended.

China warned the United States that the arms deal could do "serious harm" to
relations between the two powers.

"In the short term this deal is going to have a larger impact on the Sino-US
ties than on the Cross-Straits relations," Jonathan Holslag, an expert on
China's foreign policy and regional security in Asia at the Brussels Institute
for Contemporary China Studies (BICCS), told Deutsche Welle. "Beijing does not
want to sever the current rapprochement with Taipei."

"US arms sales to Taiwan are not the only issue straining US-China relations,"
she told Deutsche Welle. "To mention only two points: the conflict with Google
and over censorship of the Internet and a possible meeting of President Obama
with the Dalai Lama in the near future. President Obama's offer of broad-based
cooperation with China on bilateral and global issues has so far not brought
about the response from China which the US has hoped for. With its growing
economic and political weight, there might be more assertive behavior from the
Chinese side."

The fiery rhetoric from China over the weekend could dash Washington's hopes of
securing Beijing's help in curbing the nuclear programs of Iran and China's ally
North Korea while further destabilizing efforts to develop peaceful ties between
Beijing and Taiwan.

While the United States has been pushing for stronger sanctions against Iran,
China has repeatedly rejected this approach in favor of diplomacy as the only
way to resolve the long-running dispute.

"China obviously blames Washington's ambivalence," Holslag added. "Washington
reaches out one hand to beg for Beijing's support in Afghanistan, Korea and for
chasing pirates in the Indian Ocean. But with the other, the US continues to
provide military aid to Taiwan and key allies in the Pacific. As long as the
American stick to their military presence in China's periphery, they should not
expect China to behave as a partner."

"It is too early to tell whether this will have an effect of China's cooperation
on the issues of North Korea and Iran," Gudrun Wacker said. "China maintains
good relations with both countries - North Korea is a traditional ally and Iran
is an important partner for energy supply. With respect to North Korea, China is
interested in a nuclear-free Korean peninsula and in preventing the collapse of
North Korea."

"On Iran, China has always argued in favor of a diplomatic solution and has been
reluctant to support stronger sanctions against Tehran."

But what could be more damaging is the potential deterioration in China's will
to find a peaceful solution to the Taiwan situation.

China's relations with Taiwan under review

Beijing has claimed sovereignty over self-ruled Taiwan since Mao Zedong's forces
won the Chinese civil war in 1949. China has threatened to attack if Taiwan -
regarded as a renegade province by Beijing - tries to formalize its de facto
independence. Despite recognizing Taiwan as part of China since 1979, the United
States remains Taiwan's biggest ally and is obliged by the 1979 Taiwan Relations
Act to sell the island weapons it needs to defend itself.

"The baseline is still that China will use force in case Taiwan claims
independence," said Holslag. "Beijing sees the current pro-China administration
in Taipei as a unique opportunity to draw the island into its orbit. But if both
sides fail to reach consensus on the terms of closer economic cooperation or the
political status of Taiwan, a next election might entirely alter the atmosphere
and bring China and Taiwan back to the trenches."

"But indeed, America also continues to see the Taiwan Strait as its first line
of defence. In many ways, support for Taiwan is a matter of demonstrating that
the US is still a resident military power in Asia," Holslag added.
....
Author: Nick Amies