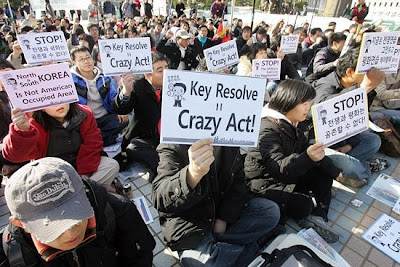 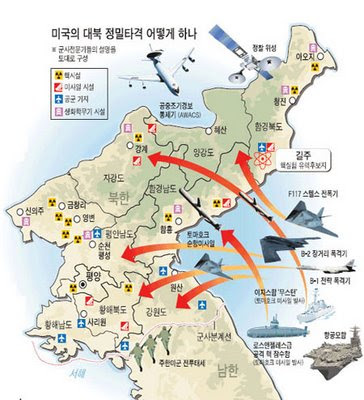 Image source: Solidarity for Peace And Reunification of Korea
Click the link above for more photos and images.
The site was for last year so there could be change this year.
For example, it was known that the aircraft carrier would not join the war drill this year,
not to provoke the North Korea. 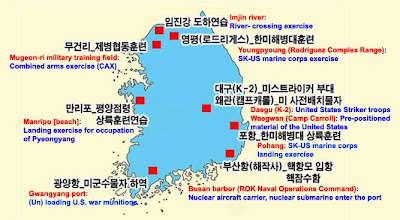 Image source: Solidarity for Peace And Reunification of Korea
(translation added by No Base Stories of Korea)

Click the link above for more photos and images.
The site was for last year so there could be change this year.
For example, it was known that the aircraft carrier would not join the war drill this year,
not to provoke the North Korea.

* Below is the arbitrary translation of the article below.

Walter Sharp, Commander of the [US-SK] Combined Forces Command announced in the afternoon of Feb. 17 that the command would conduct the annual Key Resolve and Foal Eagle 2010 (KR/FE 2010) exercises from coming March 8 to 18.

Through the press release, the commander announced its exercise purpose was “to improve the CFC ability of the defense for the South Korea.” It was known that total 18,000 U.S. soldiers, including the 10,000 USFK and 8,000 augmented forces, would join [the exercise]. The numbers of the augmented forces which were 13,000 last year were rather decreased.

He announced that the main point of the military exercise this year was specially to cultivate the abilities of the judgment & determination by the high commanders. In fact, the United States has been known that she would create the KORCOM (Korea Command) within this year, as she returns back the Operational Control right [to the ROK military] in 2012.

The Command also told that the Military Armistice Commission (MAC), United Nations Command had already noticed the exercise schedule to the DPRK military Panmunjeom representative committee. It also added that part of the military exercise would be open to press.

Due to the exercise, the possibility for the NK-US and SK-NK talks, including the six-party talks which has been stalemate even now, became remarkably row.
Posted by NO Base Stories of Korea at 10:54 PM