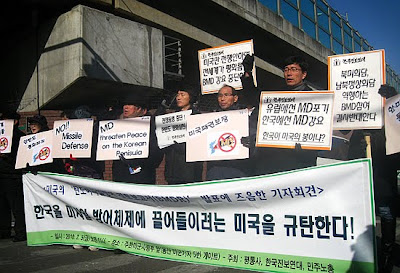 * Image source: Tongil News (photo by Koh Sung-Jin)
The Korean letters in the top right say, 'We desperately oppose the participation in the BMD
that runs counter to the NK-US, NK-SK summit meetings.'
The big letters in the banner say, "We denounce the United States who attempts
to draw the South Korea into missile defense system." 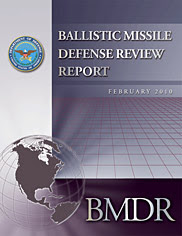 * Below is the arbitrary translation of the Tongil News article on Feb. 5, 2010

* Blue letters are the fixed

The civil society organizations are repelling in voice against the official ‘[Ballistic Missile Defense Review] Report,’ published by the U.S. Defense Department that stipulated the South Korea as the partnership country of the BMD system, saying “ it is the intention to draw the South Korea into the U.S. missile defense system.”

The three organizations of the Solidarity for Peace and Reunification of Korea (SPARK), Korean Confederation of Trade Unions (KCTU), and Korea Alliance of Progressive Movements (KAPM), having the press interview in front of the gate NO. 5, Yongsan USFK base (Headquarter of the United States Forces of Korea), Seoul at 11am, Feb. 5, and saying that “The United States, in her Review Report last Feb. 1, is calling the South Korea that has not made official to join the Missile Defense system, as the important partner of the U. S. MD system along with Japan," criticized that, “It came out from her intention to manufacture the matter of the South Korea’s joining of the U. S. MD system as an established fact.”

The organizations saying in the press release that “It is the openly known fact acknowledged by the former & current U. S. officials, that the reason that the North Korea entered the development of the nuclear and ICBM is because of the United States’ military threat against the North Korea”, pointed out the danger of the establishment of the BMD system, saying, “The United States plan of MD establishment would provoke the repulsion and response not only from the North Korea but also from China and Russia and would make the routine of the unlimited arms competition and chronic war crisis.”

Following it, the organizations pointed out that, “The MD establishment cost that would take 7~8trillion won [* about $6~7billion] would not only put the burden that cannot be bearable to South & North Korea” but it is obvious that ‘It would be a big obstacle to the non-nuclearization of the Korean peninsula and to the conclusion of the peace agreement.”

These organizations saying, “In the US review report, “operational coordination” between the South Korea and United States is, by establishing the MD operation system attacking against the North Korea, centered around the USFK MD system which is overwhelmingly far superior, and by subjugating the ‘Korean style MD’ as the below system supporting it, having the high possibility to submit the ‘Korean style MD’ into the part of global US missile defense system.”