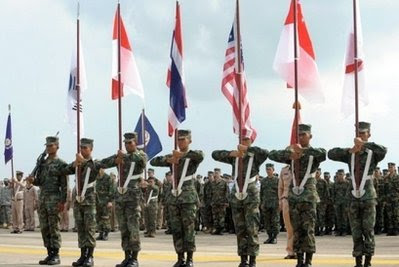 * Image source: same as the link below
'Thai soldiers carry the flags of participating nations who have joined forces for an annual combined military exercise in Rayong province, Thailand. The US military has begun its largest war games in the Pacific region - an annual training exercise with troops from Thailand, Japan, Indonesia and Singapore, now joined by South Korea. (AFP/Pornchai Kittiwongsakul)'

RAYONG, Thailand (AFP) – The US military began its largest war games in the Pacific region Monday -- an annual training exercise with troops from Thailand, Japan, Indonesia and Singapore, now joined by South Korea.

At the opening ceremony in the eastern Thai province of Rayong, US Ambassador Eric G. John said that the "Cobra Gold" exercise, now in its 29th year, had become a "multinational showcase event".

"The US continues to view this exercise, which is our premier training event in Thailand, as an important symbol of US military commitment to maintaining peace and security in Asia," he told the audience.

John welcomed South Korea's participation in the event, which runs until February 11 and will see soldiers, sailors, marines and airmen from the six countries taking part in operations across Thailand.

He said the focus of the exercise was on joint peacekeeping operations and humanitarian and disaster responses, for which it offered "unparalleled" preparation, citing the 2004 tsunami relief operation as an example.

"It's imperative that our separate militaries learn to work with each other -- together -- and rehearse for the day their services are needed to answer that call for help," he said.

"As Cobra Gold is the US military's largest exercise in the Pacific region -- and indeed, the largest exercise of its kind in Asia -- we welcome the contributions of all the nations who will participate in the coming days," he said.

In total representatives from more than 20 countries will participate, observe or support, he added.

Thailand and the United States are long-time allies, but a large sum of US military assistance to the Southeast Asian nation was suspended after a Thai coup in 2006. The aid was resumed after elections in December 2007.
Posted by NO Base Stories of Korea at 4:30 PM