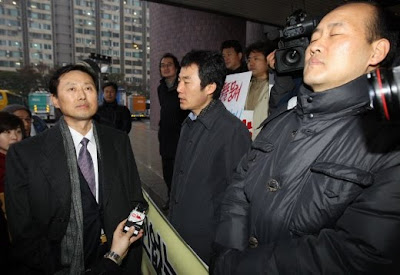 Members of MBC’s union, right, block Hwang Hee-man, left, who was selected as an MBC Board of Directors member by the Foundation for Broadcast Culture’s (FBC), in order to prevent him from entering the office in front of MBC’s headquarters located in Seoul’s Yeouido, the morning of Feb. 9.

The FBC unilaterally decided the director lineup of MBC according to their own wishes on Feb. 8. This led to protests by media-related organizations and MBC President Um Ki-young, who expressed his intention to resign. They are criticizing the FBC’s actions, saying that the FBC is turning MBC into a trumpeter for the Lee Myung-bak administration.
Posted by NO Base Stories of Korea at 11:28 PM