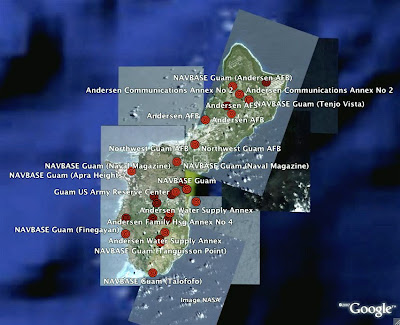 From Christina Illarmo at Weareguahan.com -- Call for transparency and extension of Draft Environmental Impact Statement (DEIS):

In 2006, Washington and Tokyo agreed to shift thousands of U.S. Marines from Okinawa after complaints that, with half of Japan's population of 47,000 US military personnel, the island was over burdened. Part of the deal struck by the two nations involved the relocation of forces and a massive military buildup on the island of Guam, without consulting the Guamanian population.

Currently the US military occupies approximately 1/3 of the Guam's landmass.

One of the many issues local Guam residents are concerned about are the measures the military will take to acquire the additional lands they seek to complete their mission. An Environmental Impact Study (EIS) was released last November using vague language making it unclear to private landowners whether or not the military would seek to negotiate with landowners instead of resorting to the use of eminent domain and/or land condemnation. This petition calls for the military to reveal to the public their plans to acquire land and to extend the period of time residents have to review and respond to said plan.

Genevieve at We Are Guahan has also asked for comments:

According to federal regulations, an EIS should “normally” be less than 150 pages. For “proposals of unusual scope or complexity” you’d normally get 300 pages. That’s probably why the 45 day commenting period is normally sufficient, but the 90 days given to Guam residents to review 10,000 pages is not. …Please make this comment at the Guam Build Up website

Japanese Parliamentarian advises Guam residents to ’speak out and stand up for their rights’
February 11, 2010
Marianas Variety 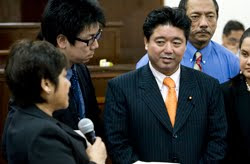 JAPANESE LAWMAKERS STOP OVER SAIPAN
Relocation of up to 4,000 US troops to CNMI mulled
February 11, 2010
DMZ Hawaii

We are Guahan: Ask for More Time for Review of EIS on US Military Base Expansion!
Wednesday, January 27, 2010
Ten Thousand Things

'The U.S. military currently is conducting public hearings on its draft environmental impact statement for its military buildup in Guam and the Northern Marianas islands. At the first hearing, residents overwhelmingly opposed the plan. Here is a powerful testimony by prophet-poet Melvin Won Pat-Borja, a former mentor with YouthSpeaks Hawai’i who now teaches in Guam.

Melvin Won Pat-Borja, representing the community organization “We Are Guahan” presents his official testimony against the U.S. Military’s plans to transfer thousands of marines from Okinawa to Guam. The Department of Defense has published a draft of the Environmental Impact Statement (DEIS) detailing their plans. The DEIS is about 11,000 pages long, and the public only has until February 17, 2010 to submit comments on the document.

“We Are Guahan” is a group of community members dedicated to reading and disseminating information in the DEIS to the public, including details of the devastating effects of the military buildup on the island’s culture, water sources, coral reefs and marine habitats, family lands, historical and archeological sites, and social environment. Furthermore, despite common belief that the buildup will benefit Guam’s economy, the DEIS reveals that majority of new jobs and contracts will be given to off-island workers and companies.

Most importantly, the U.S. military’s decision is a blatant violation of human rights for Guam’s residents, who have not been allowed to participate in any aspect of the buildup plans. “We Are Guahan” encourages everyone, in and outside of Guam, to stay informed about the military buildup! Read the EIS and make your voice heard! You can submit comments online, by mail, or in person at public hearings.

This time it is Guam, but it is just another sad example of what happens when the U.S. military doubles its presence in the Asian-Pacific region and decides to build more bases.

In this video University of Guam Professor Michael Lujan Bevacqua details the environmental and societal devastation ahead for Guam if the U.S. proceeds to expand its military bases there (they already cover 1/3 of the island).

In America it is easy for activists to find ways to avoid dealing with the military boot print that is impacting people living near the 1,000 U.S. bases around the world. Sure we need to take personal responsibility by reducing our consumerist life style back here at home. That is an important step. But that does not alleviate the suffering that is happening today.

We also must find ways to stand in solidarity with people around the planet who are literally pleading with us to help them deal with the U.S. military machine that is being paid for with our tax dollars.

We must get real. Why can't we do more to call for an end to U.S. militarism?

Thank you for this Bruce.

It's unbelievable that Obama is suggesting a freeze on domestic expenditures while increasing military spending to record levels and the US is planning to building military bases while local residents are in opposition to them in Okinawa, Jeju Island, Guam, Vicenza, Yemen, Iraq, Afghanistan -- and in other places?

And none of this is in the major media -- except for Okinawa which is framed as a "row" between the Japanese and US government which completely ignores historical, democratic, environmental and geo-political contexts. Japan and Okinawa already "host around 100 bases." 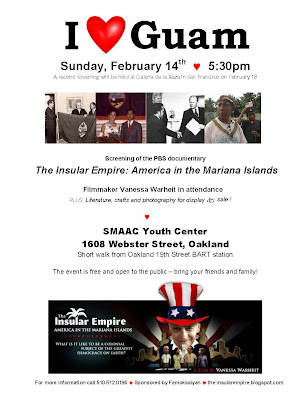 http://theinsularempire.blogspot.com/
The Insular Empire_America In the Mariana Islands
Posted by NO Base Stories of Korea at 12:31 AM