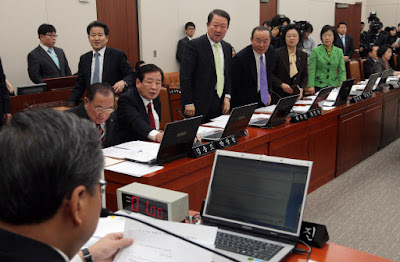 The North Korean Human Rights Law passed yesterday by the National Assembly’s Unification, Foreign Affairs and Trade Committee contains a number of problems in both procedure and content. If the law goes into effect as is, it is very possible it will create an array of problems rather than contribute to substantively improving the human rights situation of North Korean citizens.

To begin, the Unification, Foreign Affairs and Trade Committee did not discuss the law in depth. Committee Chairman Park Jin did not accept the Democratic Party’s (DP) request for sufficient debate, and in the end, the law was passed unilaterally by the ruling Grand National Party (GNP) and Liberty Forward Party (LFP) after the DP walked out of the meeting in protest. This is a case that could be considered railroading by the ruling parties.

The content of the law also contains a number of noxious articles. The article that addresses humanitarian aid to North Korea (Article 8), by strictly limiting the transfer and distribution of aid, has made humanitarian aid more difficult. The application of these limits to aid from non-governmental organizations (NGOs) as well could be seen as nothing other than an intent to block inter-Korean exchanges and cooperation in general.

In addition, Article 10, which forms a North Korean Human Rights Foundation under the Unification Ministry to study North Korean human rights and research policy, is also problematic. This is because it could limit the activity of the Unification Ministry, whose goal is to bring progress to inter-Korean relations and promote unification policy. Moreover, most of the duties of the foundation overlap with the work currently done by the National Human Rights Commission (NHRCK). This has been interpreted as an intention to strip duties from the National Human Rights Commission, an organization that is disliked by a number of conservatives.

Article 15 of the law calls for active support to invigorate activities by NGOs whose work is related to North Korean human rights. Considering the way in which some right-wing groups have sent leaflets to North Korea or planned defections and have advocated for the improvement of the human rights of the North Korean people, the law seemingly calls for their activities to be supported by the state. In fact, the GNP had been openly saying that support for these groups needed to be stipulated during the process of pushing the bill.

In general, the law stands on the logic that pressure on North Korea must be strengthened based on a negative understanding of the North Korean government. The example of the past U.S. administration under George Bush, who aggravated the nuclear issue with a policy of isolating North Korea, shows how unrealistic this approach is. It also does not go along with the current atmosphere created to foster an inter-Korean summit, as recently discussed by President Lee Myung-bak. The North Korean people are in need of improvements in their human rights situation, but sufficient consideration is needed in deciding upon the proper approach. We hope the National Assembly abandons this bill and reopens discussions from the very beginning.

Posted by NO Base Stories of Korea at 4:17 PM