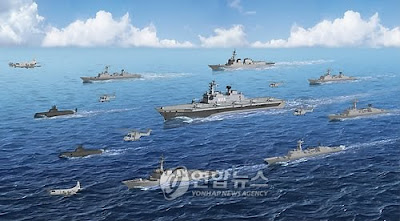 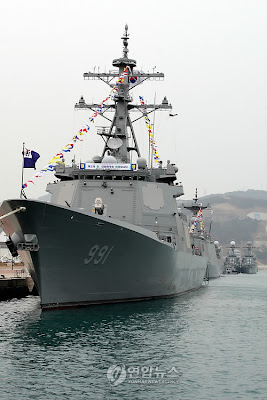 The Navy inaugurated Monday its first Aegis destroyer-led squadron Monday in an effort to develop its blue-water operational capability beyond coastal defense.

The inauguration ceremony of the 7th Mobile Fleet which will be made up of two squadrons took place at the Naval Operations Command in Busan, the Navy said in a news release.

The second KDX-III destroyer, Yi I, will be delivered to the Navy in August after sea trials.
The Navy plans to launch one more Aegis ship by 2012.

Six 5,600-ton mini-Aegis KDX-IIA destroyers, which will be built and operational between 2019 and 2026, will also join the squadrons.

The mobile fleet will be backed by 1,800-ton submarines, frigates, P3-C maritime patrol aircraft and Lynx anti-submarine helicopters, when it conducts operations to secure sea lanes and defend against a possible North Korean invasion, among others, the Navy said.

The squadrons will be based at the Busan operations command and a naval base in Jinhae, South Gyeongsang Province, it said.

A forward-deployed naval base to be built on the southern island of Jeju by 2014 will serve as the home port for the mobile fleet.

"The establishment of this mobile fleet heralds the ROK Navy's development into a blue-water force," Chief of Naval Operations Adm. Jung Ok-keun said in his speech during the ceremony. "As a rapid deployment force ranking with naval powers in the world, the fleet will support national policies and interests by perfectly completing missions assigned."

The fleet is scheduled to participate in combined or multinational maritime exercises, including the annual Rim of the Pacific Exercise (RIMPAC), which will be held in waters off Hawaii, from this year.

CSSQT is a series of at-sea exercises and tests to verify whether shipboard combat and weapon systems have been installed properly, and can be operated and maintained safely and effectively by the crew. (gallantjung@koreatimes.co.kr)