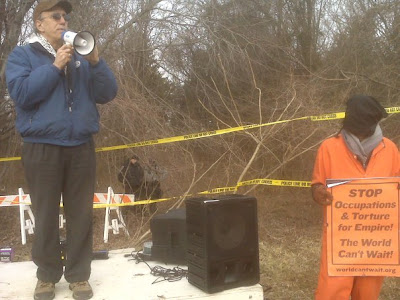 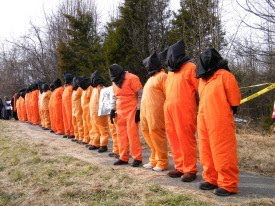 "I was invited by activist Cindy Sheehan to speak at the CIA drone protest held on Saturday afternoon (January 16) outside their Langley, Virginia headquarters. As we arrived we saw big orange barricades all along the road with yellow “crime scene” plastic tape stretched all along the highway and also draped from tree to tree in the narrow spit of woods separating the four-lane road and the CIA fortress. A 50-yard open area was our protest “zone” and was totally encircled by the yellow tape. The clear message to the many cars blasting by us was: “Don’t go near those inside the yellow tape. A crime is now being committed by them.” A massive number of CIA cops and Fairfax County police had us surrounded, even from inside the patch of woods.

Cindy had worked hard in recent weeks to promote the event, primarily by Facebook and regular emails. She told us that her Facebook page was “mysteriously” taken down in the last week creating the impression amongst some that the event had been cancelled. As it turned out just over 100 people showed up for the event. A good percentage of the folks there were the Catholic Worker activists (Witness Against Torture) who have been valiantly continuing their daily “no torture” protests in front of the White House. Dressed in their orange prison garb with black hoods over their heads they were a strong reminder of the CIA directed detentions and interrogations at Guantanamo and other such hell-holes run by the U.S. around the world.

Singer/songwriter David Rovics was there to perform but had to do so without a sound system as it didn’t work. A former FBI agent, turned peace activist after being fired for refusing to investigate hunger-striking veterans protesting U.S. illegal wars in Central America in the 1980’s, told his moving story. Kathy Kelly spoke in her usual animated and heart-rending way about the people of Afghanistan and Pakistan who are suffering the reality of drone strikes. Cindy Sheehan told us about the many messages she was getting from Pakistan where people were thrilled to hear that Americans were actually protesting at the CIA’s HQ.

My friend Will Van Natta drove up from southeast Florida for the event. He is a lifeguard in West Palm Beach and in 1997 swam about 20 miles in the ocean to protest the launch of the Cassini plutonium spacecraft. His courageous action was a huge media event and reminded us that if we each just do what we are “good at” then our contributions can be enormous. He has just bought time on a local radio station and will air his own weekly progressive talk show.

When I spoke at the protest I said how glad I was to be there for the first time in my life. The CIA, and their drone attacks, is the symbol of the corporatization and privatization of U.S. war policy. The running of wars has essentially been taken away from a neutered Congress and put into the hands of the secret cabal that now runs our government. We need to shine a light on this.

I also of course talked about how U.S. space technology controls the drones as it does most Pentagon “net centric” war fighting these days. Robotic warfare might be “hands off” and “out of sight-out of mind” but it is still dirty and is killing legions of civilians.

I reminded folks that drone and other robotic devices were ultimately just manifestations of a larger war and domination policy. We need to keep putting in front of the public the big picture and I went on to talk about “security export”, the U.S. role under corporation globalization of the world economy. Endless war is America’s future and social collapse at home will be the end result unless a movement springs up quickly.

On the train ride to DC I began reading a new book called “Democracy’s Prisoner: Eugene V. Debs, The Great War, and The Right to Dissent.”

Debs is my hero in American history. He ran for president five times as a Socialist and the last time, 1920, did so from the Atlanta penitentiary where he was jailed for having spoken out against U.S. participation in World War I. Arrested under the “Sedition Act” Debs and many others were jailed for opposing President Woodrow Wilson’s military draft and his decision to move the U.S. into that bloody war.

I began my CIA protest speech by telling a story from this book. Wilson was elected as the “peace candidate” in 1916 saying that he would keep the U.S. out of the European war. But immediately after the election was over Wilson turned and began a massive national war mobilization and cracked down hard on the large anti-war movement that existed prior to the election.

The book, written by Ernest Freeberg, recounts, “For many, the conflict was still distant and incomprehensible. Christian pacifists, agrarian populists, and many progressive reformers believed that Wilson’s decision to intervene in Europe betrayed the nation’s highest principles, while the Socialists still insisted that the country would be fighting ‘for the interest of financial freebooters [corporations] only.’ Most of the liberal peace organizations either disbanded or supported Wilson’s war to end all wars, but many individuals from those groups dreaded the prospect of having to choose between their country and their conscience.”

One man in the crowd outside the CIA HQ yelled out at this point asking me if I was trying to make a “subtle” comparison to Obama? Of course I was. Obama is now doing what Wilson did during his time in office, neutralize the left and fragment the anti-war movement. We need to learn from these lessons of history.

I ended my talk by sharing the story about our recent launch of the Bring Our War $ Home campaign in Maine. I said, “In Maine we are calling on our two congresspersons to not only vote against further war spending bills but also become leaders in the House against war. The House is where we might have a slim chance to block any more war funding but we are going to have to first enliven our local communities and states. If we want to stop war then we have to fight to save social progress at home. If we want to ground the drones we have to connect them to the suffering people all over this nation who will increasingly be the brunt of this mad war for corporate control.

“Good luck to you all and get organized.” 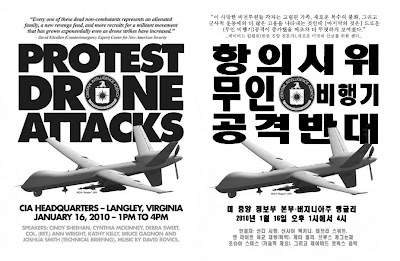 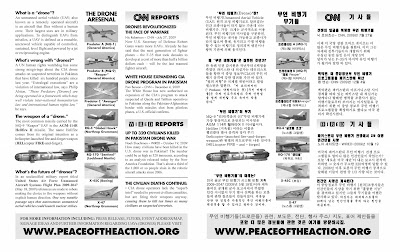 It was recently announced that the White House gave the CIA permission to increase its drone bombings in Pakistan of which to date over 1/3rd of the deaths are civilian.

The CIA is a profoundly violent and corrupt organization and, while we don't think the Military should be using manned, or unmanned aerial vehicles, we think the drone bombings from CIA robots are particularly despicable.

Many of us will be in the DC area for the Witness Against Torture vigil-fast from Dec 11-22, so we decided to do this protest on Saturday, January 16th.

Songs of Social Significance to be performed by David Rovics. http://www.davidrovics.com/


Please join us if you can!

Posted by NO Base Stories of Korea at 7:25 AM