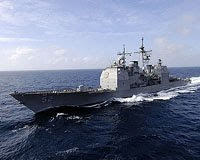 * Image source/ caption: same as in the article below
'The USS Bunker Hill completed its operational trial of its full combat system, which includes Aegis Open Architecture, in August. This milestone is part of the development path to merge Aegis Open Architecture and Aegis BMD in 2012, when the Aegis Modernization program begins for the Navy's 62 Aegis-equipped destroyers.'

-MEADS is designed to permit full interoperability between the U.S. and allied
armies, and it is the only medium-range air defense system to provide full
360-degree coverage.

Aegis: In July, the Aegis BMD system destroyed a ballistic missile target in an
at-sea firing under operationally realistic conditions - marking the continued
successful engineering development of the next generational upgrade in Aegis BMD
capability.

The USS Bunker Hill completed its operational trial of its full combat system,
which includes Aegis Open Architecture, in August. This milestone is part of the
development path to merge Aegis Open Architecture and Aegis BMD in 2012, when
the Aegis Modernization program begins for the Navy's 62 Aegis-equipped
destroyers.

JS Myoko, Japan's third destroyer equipped with the Aegis BMD system,
successfully intercepted and destroyed a ballistic missile target above the
atmosphere during an October test event. Also that month, the MDA awarded a $1
billon follow-on contract providing for the integration of Aegis BMD into the
Aegis Modernization program and a contract vehicle for the next five years to
continue evolving BMD capability.

The program is on track to complete its final system-level CDR event in August
2010, with initial flight tests planned for 2012.

The program announced that it had received approval to use a European
cryptographic device to implement Identification Friend or Foe in October. The
selected subsystem makes both of the MEADS radars more robust than other current
U.S. systems and provides the highest level of fratricide prevention available
to protect coalition pilots.

MEADS is designed to permit full interoperability between the U.S. and allied
armies, and it is the only medium-range air defense system to provide full
360-degree coverage.

PAC-3 Missile: Lockheed Martin broke ground on an expansion of its
state-of-the-art PAC-3 Missile production complex in Camden, AR, in May. This
new facility will allow for continued production expansion and modest hiring of
new employees over the next several years.

The flight test demonstrated the Patriot Configuration-3 upgrades to Japanese
Patriot ground system, and the addition of the PAC-3 Missile Segment to detect,
track, engage and destroy a tactical ballistic missile target in a realistic
battlefield environment.

THAAD: In March, Lockheed Martin and the U.S. Missile Defense Agency conducted
their sixth successful intercept in six attempts of the THAAD weapon system at
the Pacific Missile Range Facility in Kauai, HI. This flight test demonstrated
the system's ability to detect, track and intercept a separating target inside
the Earth's atmosphere.

This was the first salvo mission, with two THAAD interceptors launched against a
single separating target, which is a tactical option for the system. Data
indicates the first interceptor successfully destroyed the target while the
second interceptor destroyed a large piece of debris from the initial intercept.

In October, the U.S. Army and the MDA activated the second THAAD Battery at Fort
Bliss, TX, signifying the continued integration of THAAD into the U.S. Army's
Air and Missile Defense force structure. Unit training on the second THAAD
Battery is underway with equipment hardware deliveries slated to occur within a
year. 2009 Missile Defense Milestones - Next-Generation Capabilities and
Supporting Systems.

Logistics and Sustainment: In November, Global Aerospace Logistics, LLC (GAL),
Lockheed Martin and Raytheon announced the signing of a Joint Collaborative
Agreement that will establish world-class logistics and sustainment services for
the United Arab Emirates' air and missile defense systems.

Under the agreement, GAL will work with Raytheon and Lockheed Martin to develop
a logistics and sustainment capability to meet the immediate and future needs of
the UAE's air and missile defense strategy.

In 2009, Lockheed Martin shipped the next-generation Launch Vehicle-2 target to
a test range in preparation for an upcoming test.

Space Based Infrared System (SBIRS): In November, the Lockheed Martin-led team
developing the Space Based Infrared System (SBIRS) program for the U.S. Air
Force successfully completed thermal vacuum testing of the first geosynchronous
(GEO-1) satellite, one of the most significant program milestones that validates
spacecraft performance in a simulated space environment.

The first SBIRS GEO spacecraft is planned for delivery to Cape Canaveral Air
Force Station in late 2010, where it will then undergo final processing and
preparation for launch aboard an Atlas V launch vehicle.
===========================
Stop NATO
Posted by NO Base Stories of Korea at 11:19 PM