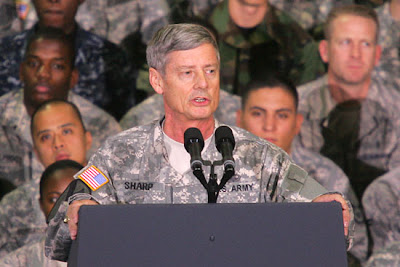 Yonhap News
By Hwang Doo-hyong
WASHINGTON, Dec. 14 (Yonhap) -- The United States said Monday it will deploy some of its troops in Korea to other conflict regions in the future to meet growing security challenges both regionally and globally.

"We also need to have our forces in Korea in the future to be able to more regionally engaged and globally deployed," Gen. Walter Sharp, commander of U.S. forces in Korea, told a forum at the Center for Strategic and International Studies here. "Regionally engaged and globally deployed, but never forgetting that our No. 1 responsibility in Korea is to defend the Republic of Korea if we did go to war."

Sharp's remarks are in line with those of Adm. Michael Mullen, chairman of the Joint Chiefs of Staff, who said earlier this month that the Obama administration will follow up on the strategic flexibility posture drawn up by the Bush administration for rapid deployment of U.S. troops abroad to conflict regions.

"The idea of strategic flexibility is one we are addressing with the South Korean leadership," Mullen said. "We think it is very important, part of a strategic concept for security both for the region and globally."

Mullen also said in October that discussions are under way about rotating U.S. troops in South Korea, although he added, "We are very committed to 28,500 troops' presence in South Korea. That's strongly reaffirmed by President Obama, both publicly as well as his meetings with President Lee (Myung-bak)."

Sharp explained the contradiction in Mullen's remarks, saying some of the 28,500 U.S. troops to be deployed abroad will eventually return to South Korea, where their dependents reside.

"Sometime in the future we could have forces that could, with consultations between both nations, be able to deploy, either ourselves or together, in different places around the world," Sharp said. "But not deploy away and not come back to Korea, but deploy away with the families remaining in Korea, and then come back to Korea after the deployment, never forgetting our No. 1 responsibility."

South Korean officials have denied media reports about a possible troop reduction in Korea, prompted by remarks by Obama to American soldiers in Seoul last month. "The story of your service goes beyond this peninsula," Obama said. "Others among you served in Afghanistan. Others among you will deploy yet again."

Seoul officials have said they had never discussed a troop reduction with the U.S., adding that Obama's remarks should be seen as a routine rotation of troops without reducing the number.

In announcing the plans to send a 140-strong Provincial Reconstruction Team to Afghanistan next year, accompanied by about 320 troops for their protection, South Korean Foreign Minister Yu Myung-hwan recently said that increased aid to Afghanistan by South Korea is linked to the stable deployment of U.S. troops in the Korean Peninsula.

Sharp said that the redeployment of U.S. troops in Korea will take place in close consultation with South Korea.

"The regional engagement and global deployment, we are not ready for that to happen today," he said. "We have to be able to work through, but be able to at least have the ability to be able to look at where do we want, what capability do we have in the alliance that can help both regionally and globally and the security and the challenges or opportunities we have."

On South Korea's retaking of the wartime command control of its troops from the U.S. in 2012, the U.S. commander said, "The OPCON transfer will take place on the 17th April, 2012."

"I am convinced that we will be militarily prepared for that," he said. "OPCON transition does not mean an independent OPCON. We will still be in the alliance and the coalition will still be committed to fig

ht side by side."

http://nobasestorieskorea.blogspot.com/2009/12/four-party-talks-no-re-dispatch-to.html
Tuesday, December 15, 2009
Four Party Talks! No Re-Dispatch to Afghanistan! No Illegal Defense Sharing Cost! And Returning Back of the Dongducheon USFK Base, Soon!