Text Fwd: North Korea-U.S. bilateral talks returns to September 19 joint statement as a framework for give and take 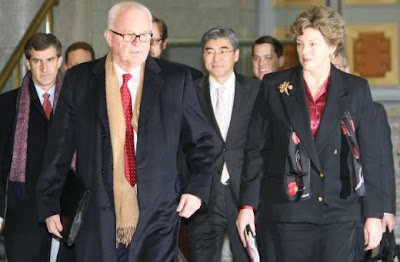 Stephen Bosworth, U.S. special representative for North Korea policy, returned from North Korea on Thursday. Although some observers are noting that the first round of high ranking talks between North Korea and the U.S. did not produce a clear conclusion such as North Korea’s announcement to return to the six-party talks, it is possible to say that it signals momentum in the Korean Peninsula denuclearization process that has been derailed for almost one year.

Bosworth said at a press conference on the same day, “The two sides discussed all facts pertaining to the September 19, 2005 Joint Statement of the Fourth Round of the Six-Party Talks.” He also emphasized, “North Korea has agreed that the implementation of that declaration should be continued.” By combining these two remarks of Bosworth, one can conclude that North Korea and the U.S. share a bond of sympathy regarding the basic framework of the September 19 statement.

The September 19, 2005 joint statement stipulates that in exchange for North Korea’s agreement on denuclearization, the other five parties would provide a peace agreement, normalized relations, and economic aid to North Korea. Thus, it seems that the U.S. and North Korea have come to an agreement about holding each other to a framework of give and take.

It is uncertain, however, to observers whether there will be a smooth passage to the denuclearization process. Above all, some are referring to an ‘Order Problem’ regarding how the two sides will combine their demands. While it seems that North Korea wants to return to six-party talks only after receiving a guarantee of a peace agreement through North Korea-U.S. direct negotiations, it appears that the U.S. has put off a peace agreement depending on whether six-party talks resume and a denuclearization program gains momentum.

Nonetheless, it appears that the U.S.-North Korea bilateral talks have had results in that it has forced South Korea to reconsider its policy on the matter. Kim Yeon-chul, head of the Hankyoreh Peace Institute says, “The weak point of the Lee Myung-bak administration’s North Korean policy is that it contains no vision regarding a peace agreement.” He also says, “If the South Korean government maintains its stance that shows indifference on the issue, it could become an obstacle in returning to the six-party talks.”