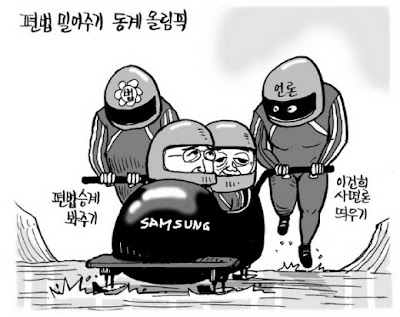 Former Samsung Group Chairman Lee Kun-hee and his son Lee Jae-yong, the new executive vice-president of Samsung Electronics, drive a new four-man bobsled team with the help of the Minister of Justice and a conservative media CEO.

Observers of the controversy over the Lee-administration facilitated entry of conservative newspapers into broadcasting, and the ownership transfer and management succession taking place at Samsung Group have been taking note of the leniant nature of the Justice Ministry. Criticism against the Justice Ministry has also been fueled by calls for a presidential pardon for former Samsung Chairman and South Korean IOC member Lee Kun-hee just to allow him to lobby for South Korea to serve as host of the Olympic Winter Games.

Hankyoreh
Lee Jae-yong and Choi Gee-sung: New leadership team at Samsung:
As ownership transfer and management succession to the eldest son of former Chairman Lee Kun-hee begins, debate over son’s management capabilities continues
Posted on : Dec.16,2009 11:58 KST
Posted by NO Base Stories of Korea at 1:47 PM