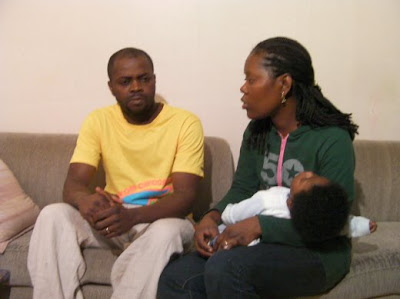 * Image source/ caption: same as below
'The couple, Mahoma, left, and Bena are from the Democratic Republic of Congo
and have applied for refugee status in South Korea.'
Hankyoreh
Human Rights Day in S.Korea: 2,269 refugees in need of emergency relief measures
NANCEN refugee human rights center reports that minors are being denied the baseline right to live
Posted on : Dec.10,2009 14:09 KST

Last Thursday, four-month-old “Mumbere” suddenly became short of breath. His mother “Bena,” age 30, took him to the hospital, but she had no health insurance and the costs of a four-day hospital stay for pneumonia amounted to one million Won. Bena worried that her two children might have caught the H1N1 influenza, but were unable to receive inoculation because they are “special foreigners.” Her husband, “Mahoma,” age 37, quit working last summer in compliance with refugee application requirements and their most immediate concern is hospital costs.

Mahoma’s family is unable to return to their home country of the Democratic Republic of Congo and applied for refugee status in South Korea in 2006. The South Korean government rejected their application, and their formal objection went unrecognized. The Ministry of Justice sent out a departure order, and the case is now in administrative adjudication.

Refugee applicants like Mahoma and Bena are legally allowed to stay in the country but are unable to do anything, including finding work and receiving an education. Meanwhile, the children they give birth to in South Korea remain without a nationality, unrecognized either in their parents’ home country or in South Korea. Their children are not considered eligible for South Korean citizenship in a society that opts for a jus sanguinis (right of blood) policy on citizenship, and refugees who have fled persecution in their home country are unable to file birth notices with their embassy. Both of the children Mahoma and Bena have had in South Korea are without nationality.

NANCEN, a refugee human rights center headed by Hong Se-hwa, reported Wednesday that as of late 2008 there were a total of 81 refugee minors aged 16 or younger in South Korea, including 65 applicants for refugee status and 16 with recognized refugee status. In 2009, the total number of refugees living in South Korea has reached 2,269. The information was obtained from the Ministry of Justice through an information disclosure request submitted just prior to Dec. 10 or Human Rights Day celebrated around the world.

NANCEN also reported that 28 refugee minors, or 34.7 percent of the total, are infants and small children aged 3 and under, including 23 applicants and five with recognized refugee status. NANCEN said, “These children are not receiving sufficient supplies of necessary inoculations, dry milk, diapers, and other essentials.”

NANCEN stressing that emergency relief measures are necessary and added, “The refugee minors’ situation in South Korea is one of ‘four Nos’ - no nationality, no health care, no education and no attention.”

In a survey of refugee human rights in South Korea issued last year by the National Human Rights Commission of Korea (NHRCK), 80.6 percent of the 309 participants answered that their children lacked nationality, while 81.4 percent reported having no health insurance of any kind. Additionally, some 25 percent said their children were not receiving any education.

Kim Sung-in, secretary general of NANCEN said, “Societal interest in international refugees and international relief efforts has risen greatly in recent years, yet people are apathetic about refugees in South Korea, and refugee minors in particular.”

Kim added, “This is a time when we urgently need the members of society to extend a warm helping hand so that the baseline right to live is protected for all refugees who come to South Korea.”

Please direct questions or comments to [englishhani@hani.co.kr]
Posted by NO Base Stories of Korea at 8:56 PM