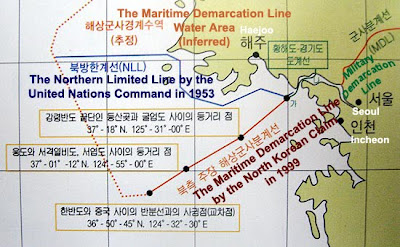 SEOUL, Dec. 21 (Yonhap) -- North Korea said Monday that it was setting a "peacetime firing zone" along the inter-Korean border in the Yellow Sea, raising tension in the volatile region where a blaze of gunfire was recently exchanged.

"In order to counter the reckless military provocations of the warmongers of the South Korean military," a spokesman for the Navy Command of the North's Korean People's Army said, "our navy declares the waters on the extension of the Military Demarcation Line in the West Sea under the control of our army as a peacetime naval firing zone of coastal and island artillery units of the KPA (Korean People's Army)."

South Korea expressed regret over the North Korean warning, pledging a "stern response" should the communist state provoke on the maritime border.

"We express grave concern as the North's threat raises unnecessary tension between the Koreas," the South Korean Navy said in a statement, calling the North Korean argument "irrational."

The Military Demarcation Line refers to the line North Korea unilaterally drew just south of Northern Limit Line (NLL) in 1999 as the maritime inter-Korean border, declaring the NLL that has existed for decades unfair and void.

The NLL, part of which was drawn close to the North Korean coastline, was set by the U.S.-led United Nations Command at the end of the 1950-53 Korean War.

The Koreas exchanged brief gunfire in an area just south of the NLL in November, and naval skirmishes that erupted nearby in 1999 and 2002 led to casualties.

The latest warning raised military tension in the region that overlaps between the NLL and the line that North Korea claims should be the border.

"The frequent intrusions of the warmongers of the South Korean military into the territorial waters of the north side in the West Sea of Korea have recently developed into adventurous bombardments," the unidentified naval command spokesman said.

All fishing boats and warships should take security measures to protect themselves in the "peacetime naval firing zone," he said.

Also Monday, South Korea said it planned to resume cash support to enhance the health of North Korean infants and children, which it halted after the North's nuclear test earlier this year. Seoul's Unification Ministry said it will provide millions of dollars to U.N. agencies that operate health care programs for those who are nutritionally at risk in North Korea.

Last week, Seoul provided US$15 million in medication to the North to help prevent an epidemic of the H1N1 flu virus there.