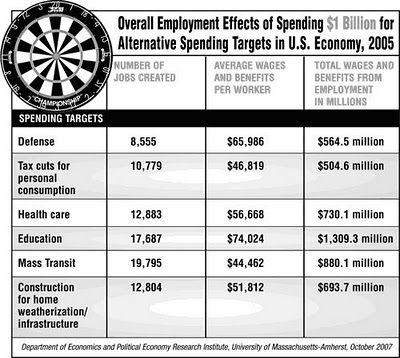 War Funding:
Both Chellie Pingree and Mike Michaud just voted for the $128 billion Iraq-Afghanistan-Pakistan war funding which was included in the $636 billion Pentagon 2010 appropriation bill. Since the bill also contained $5.5 billion for BIW, and since the Congresspeople are committed to voting for BIW, they were in no position to vote against the bill. Talking to them about the fact that there would be more employment in civilian production falls on deaf ears. A supplemental appropriation of $30 billion more for the Obama Afghan surge will come up in the spring.

Agreement on Campaign Plan:
There was unanimous support for the three-month campaign plan (January 18-April 15) and for the action weekend on April 10-11. All local peace groups in Maine are strongly encouraged to organize local events during this period on the Afghanistan issue with particular emphasis on the cost of the wars. More information can be obtained about the cost of war spending to Maine towns at http://www.nationalpriorities.org/costofwar_home Our primary demands will be for Congresspersons Pingree and Michaud to vote against any more war funding and to become real leaders in Maine and in Washington against these endless wars.

Talking About the Costs of War:
1)It was suggested that we should always bring handouts to any meeting where we speak about the costs of war, be it a school board meeting, a town meeting, etc.

2) It was suggested that we find people who have been directly impacted by cutbacks to testify at these meetings. But we were warned that people who've lost their jobs often want to keep a low profile.

3) Some ministers have made the connection in their sermons between the increased numbers of people in the food pantries of their churches and the war. We should encourage more of this.

Kicking Off the Campaign:
Mike Brennan has offered to help us put together a news conference in Augusta at the state capital (Hall of Flags) that would make connections between state budget cuts and war funding. It will be held on Thursday, Jan. 14 (11:00-noon), the week before MLK holiday. MLK's words should be featured. The committee to work on the news conference includes Wells, Sally, Jacqui and Bruce. Bruce will contact Mike Brennan. We should all try to be at the news conference in Augusta. (Bring appropriate signs.) Lisa said she plans to urge her legislators to attend. The NAACP should also be invited to attend. We should all help contact social service groups, education groups, and public transit groups. Suzanne will talk to Commissioner of Labor Laura Fortman. Lisa suggested talking to Sue Gendron, Commissioner of Education. We should talk to our town officials about how the funding cuts are affecting their towns. Sally suggested a dramatic presentation to illustrate the issue.

Draw-a-thon:
Natasha has approached a number of Maine artists and poets about holding a draw-a-thon at the United Church of Christ in Bath on Feb. 13 (Feb 27 snow date). Their task will be to produce art that speaks about how the artist would spend the war money here in Maine. The artists will be open to ideas from us. In the evening (5:00 pm) there will be a poetry event and a potluck supper for the public. Bruce has asked Hana Maris to emcee the event. Zines featuring the art will be produced. Bruce offered Global Network funding if there is not enough money to pay the artists for gas to Bath. Contact Natasha for more details mayersnatasha@gmail.com

Draw-in:
At a later date, a draw-in will be held at the State House. One suggestion: The draw-in should be held when the Legislature is debating cuts in services so as to connect the dots between the war and budget cuts at home. There was discussion about hanging the art in the State House. Natasha isn't sure whether children should be included among the artists. She also talked about having the exhibit tour the state. Natasha requested volunteers to be liaisons between the artists and the media. Lisa from Code Pink Maine will work with Natasha to coordinate this event.

Campaign Sponsors:
The sponsoring groups for this campaign so far are the Maine Green Independent Party, Maine Veterans for Peace, the Global Network Against Weapons & Nuclear Power in Space, the Peace & Justice Center of Eastern Maine, Code Pink Maine, Waterville Area Bridges for Peace & Justice, Pax Christi Maine and PeaceWorks. Please let Bruce know if your organization would like to be added to the sponsor list. Money is not required but would be most helpful.

Town Meeting Warrant:
Gary offered to draft the wording for a warrant that can be used at town meetings. The warrant would call on a town to oppose funding the war in Afghanistan so that the town can pay for town projects. Lisa warned that the wording should be at a fifth grade level.

Donations:
The Global Network will be the campaign fiscal sponsor because it has non-profit status, so all sponsoring groups can make their donations to the Global Network. Send them to PO Box 652, Brunswick 04011. Individuals are also urged to donate. Michael Cutting gave $100 at the meeting to get things going.

Website:
Dan has volunteered to create a website for the campaign. JustHost will be the host. It offers free domain for life and it's very inexpensive. We will keep it going anywhere from six months to a year. Bruce will send Dan a check to cover costs. Every sponsoring group should send its website address to Dan danellis@earthstewards.org so he can put it on the campaign website as a link.

Door Hangers & Leaflets:
Gary put together a draft of the text for the door hangers. He asked everyone at the meeting to send him suggestions for changes. We discussed what color the campaign should be. Suggestions: Green is the color of money, but to many it's the color of tree huggers; Pink is not a good idea; Red is high alert—it could be on a stop sign; Yellow is a warning; Red, White, and Blue appeals to Americans. Natasha wants a visual on the hanger. Dan asked for a decision on the color so that the website could reflect it. The door hanger could be in the shape of a dollar bill or a dollar sign. Some suggestions for text: "There's not enough money in Maine;" "It's tax day—do you know where your money is?" "Maine's economy is under dire threat." Alan suggested that when we go door to door we wear a large label that says something like "I'm John Doe with the Maine Campaign to Bring Our War Dollars Home." Bruce will ask Nancy Randolph to design the door hanger once we've decided what we want on it. Bruce also passed around his draft of a general leaflet and asked for comments to be sent to him. If you would like either of these sent to you via email for review just send request to globalnet@mindspring.com

Letters to the Editor:
Bruce urged us to write letters to our local newspapers and also to the free weekly papers about the war funding issue during this campaign. More people are reading the weeklies these days. Two papers that were praised were the Free Press in Rockland and the Portland Daily Sun.

Reforestation Project:
Mariam Raqib spoke to us about a project she's involved with to plant trees on 1,000 acres in eastern Afghanistan where her family comes from. She is accepting donations. For more info contact her at raqibm@yahoo.com

Next Meeting:
We will hold a conference call for our next meeting on Sunday, Jan. 10 at 3:00 pm. Lisa will facilitate the call.
Posted by NO Base Stories of Korea at 12:29 PM