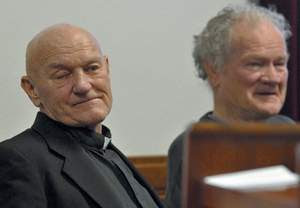 * Image source/caption: same as the link below
'The Rev. Carl Kabat, left, sits with his friend Bill Sulzman, right, of Colorado Springs during the prosecution's closing remarks Tuesday in Kabat's trial for criminal mischief and trespassing at the Weld County Courthouse in Greeley. Kabat was found guilty in his case and was sentenced to time served. STEPHANIE BURCHETT/gtphoto@greeleytribune.com'

In the end, a jury had no choice but to convict.

The Rev. Carl Kabat, 76, was photographed at the N-8 missile silo in northeast Weld County. Two-foot bolt cutters were found on the ground. There was a hole in the fence surrounding the facility, and he was waiting inside for his eventual arrest.

Kabat had breached nuclear missile facilities like these for the past two decades, and had 17 convictions behind him in his quest to do his small part to rid the earth of nuclear weapons, which the Catholic Church has deemed a crime against humanity.

But the members of the jury had to look beyond the message. After one hour of deliberations, they convicted him of the two misdemeanor criminal mischief and trespassing charges.

“We understand what he was standing for,” said jury member Ben Salgado, 56, of Windsor, after the verdict. “We just wish he would have chosen a different forum.”

As the jury was dismissed, Kabat applauded them, some walking out with tears in their eyes. One said as she left the courthouse: “It was very emotional.”

The St. Louis priest was immediately sentenced to the time he'd already served behind bars — 137 days — though deputy district attorney David Skarka asked for the maximum of one year for each of the misdemeanors to be served back to back. The county already had shelled out roughly $7,950 to keep him in jail for almost five months, based on a cost of about $58 per day per inmate. Had he been sentenced to Skarka's request, the county would have paid $26,000 more to keep him for a remaining 456 days.

“It's unfortunate that they didn't have any significant stance,” Kabat said as he left the courthouse. “I understand because these people are ordinary people, and they don't realize the power they have ... or the insanity (of those weapons) in the ground.”

“I will not make restitution, or pay fines or make any payments. That will be supporting nuclear weapons,” Kabat vowed.

That capped a two-day trial that brought with it one big twist: After his attorneys presented to the jury a multitude of banners he had hung up at the silo facility, Kabat fired them — a move he'd planned months ago so he would have the freedom to say what he wanted to say in court.

But Kabat's testimony on his own behalf didn't go quite the way he planned, as evidenced by the prosecution's objections to him continually bringing up arguments about the destructive power of weapons of mass destruction.

After several attempts by Nichols to get Kabat to focus on the evidence against him, Kabat decided it didn't matter what he said.

The jury members, however, immediately wrote down their questions.

One juror asked why he wouldn't rather just protest peacefully outside the perimeter of the fence.

Skarka asked him simply, “Are you above the law?”

Kabat replied: “All wrong law, yes. God's law is above all these man-made things.”

During his closing arguments, Kabat quoted Albert Einstein and Ghandi, and he beseeched the jury to be the conscience of a nation.

“I don't know you, but you are my sisters and brothers,” Kabat said. “We're all God's children, and we have to look after one another. We have to be significant actors. How many times have you written to your senator, to your congressman? ... For some of us, (it's been) countless times.”

Salgado, of the jury, a postal worker by trade and a former military man, said the potential sentence did weigh on the jury's mind.

“That really weighed on all of our hearts,” he said. “It wasn't an aggressive (protest), and he wasn't in there to really damage things. It was just a political statement.”

He said the trial was an eye-opener, however. Some on the jury, he said, didn't even know there were silos in Colorado. But, he said, he wouldn't be surprised to see Kabat protesting again someday. Kabat had earlier said he'd be happy to die in prison for peace.

As the seven-person jury filed from the courtroom, having just returned two guilty verdicts against him, Father Carl Kabat rose from his chair and applauded them.

The St. Louis priest was convicted in Greeley on Tuesday of criminal mischief and trespassing, both misdemeanors, for cutting a hole in a fence that guards a Minuteman III nuclear missile silo in Weld County last August, draping antiwar banners around the silo, saying a prayer and trying unsuccessfully to pry open its lid.

It is what Carl Kabat does. He has spent the better part of the past three decades in prison for staging similar protests here and across the United States against the missiles, whose very existence he calls "simply insane."

Weld County Court Judge Dana Nichols sentenced the 76-year-old priest to the 137 days he spent in county jail following his arrest and gave prosecutors time to seek restitution to F.E. Warren Air Force Base for damages.

I don't have many heroes, but Carl Kabat is one of them. I deeply admire men of conviction, particularly those who buck the system and gnaw relentlessly at it in the pursuit of peace.

I was introduced to him years ago, not long after he was released from the federal penitentiary in Florence, having done 10 hard years for staging a similar missile silo protest.

He sat down with me for dinner, shrugged and acted as if he had just served an hour in third-grade detention.

"Do you know how many men I ministered to in Florence?" I remember him saying over and over as I marveled that any man would so freely give up his liberty in the pursuit of a cause so many people over the years have abandoned.

I caught up with him this week as he rushed to get home to St. Louis to spend Christmas with his younger sister, his only surviving sibling, and the rest of his family.

I asked him of his applauding the jurors, some of whom wept as they filed out.

He had fired his court- appointed lawyers during the two-day trial, a preplanned move he had insisted on so he could address the jury personally.

"I don't know you," he told them during closing arguments, "but you are my sisters and brothers. We're all God's children, and we have to look after one another. We have to be significant actors."

"Significant actors" is one of Carl Kabat's favorite expressions. It means going outside of yourself, he always says, to take positive action against that which you know to be wrong.

He had wanted, he explained, for one or more on the panel to see the righteousness of his cause and hang the jury.

"What are you going to do?" he said. "I applauded them to thank them. They had given it thought."

We talked for a long time, about the law and morality, him recalling a time long ago that he stepped off a bus and saw a sign.

"It said 'black water' and 'white water.' I kick myself to this day that I didn't take a drink of black water, even one swallow. What could they have done to me?"

I asked him, as I always do, if he planned yet another protest anytime soon. And for the first time ever, Carl Kabat hedged.

"I'm 76 years old, older than my old man when he died, so I might be living on borrowed time," he said.

"I might have died in prison, I might die on the way to St. Louis. Either way is OK with me. I am just going to take my life and the message day by day."

Bill Johnson writes Mondays, Wednesdays and Fridays. Reach him at 303-954-2763 or wjohnson@denverpost.com.

Posted by NO Base Stories of Korea at 9:49 AM