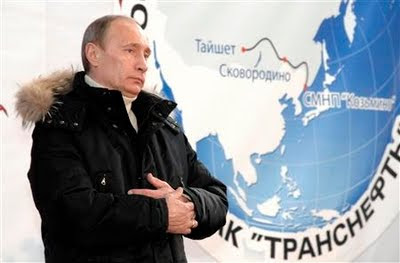 The two largest nuclear powers say they are close to agreeing on a successor to the 1991 Strategic Arms Reduction Treaty (START I), although U.S. President Barack Obama and Russian President Dmitry Medvedev have yet to clinch a deal.

Asked by a reporter what the biggest problem was in the talks, Putin said: "What is the problem? The problem is that our American partners are building an anti-missile shield and we are not building one."

Speaking to reporters in the Far Eastern Russian city of Vladivostok, Putin said the U.S. plans would fundamentally disrupt the Cold War balance of power and Russia would thus be forced to develop new offensive weapons.

The comments, from Russia's most powerful politician, showed the seriousness of the problems hampering talks on a replacement for START I and illustrated the deep unease still felt in Moscow over Washington's missile defense plans.

In Washington, State Department spokesman Ian Kelly rejected any attempt to broaden the START negotiations to cover defensive weapons systems, although another senior U.S. official voiced optimism over the talks.

"We have made substantial progress in the negotiations and remain confident that when talks resume in January that we'll be able to finalize an agreement," the senior official said.

In September, Obama said the United States would scrap parts of George W. Bush's missile defense plans, a step seen as an attempt to allay Kremlin fears that the system was a direct threat to Russia.

Cutting the thousands of nuclear weapons accumulated during the Cold War is the centerpiece of Obama's efforts to "reset" relations with Russia, which the United States is pressing to offer more help on Afghanistan and Iran.

Russia's leaders have remained wary about Obama's revised missile defense plans, which are based on sea- and land-based missile interceptors in Europe.

"If we are not developing an anti-missile shield, then there is a danger that our partners, by creating such 'an umbrella,' will feel completely secure and thus can allow themselves to do what they want, disrupting the balance, and aggressiveness will rise immediately," Putin said.

"In order to preserve balance ... we need to develop offensive weapons systems," Putin said, echoing a pledge by Medvedev last week to develop a new generation of strategic nuclear weapons.

"The problems of anti-missile defense and offensive weapons are very tightly linked to each other," he said, adding that talks on a new treaty were moving in a generally positive direction.

"While the United States has long agreed that there is a relationship between missile offense and defense, we believe the START follow-on agreement is not the appropriate vehicle for addressing it," Kelly said in a statement.

"We have agreed to continue to discuss the topic of missile defense with Russia in a separate venue," he said.

Russia and the United States failed to agree on a successor to START I by December 5, when the treaty was due to expire, and have extended it as they try to work out a new agreement.

Obama and Medvedev failed to clinch a deal when they met on the sidelines of the U.N. climate conference in Copenhagen earlier this month. No reason was given, although they said they were close to an agreement.