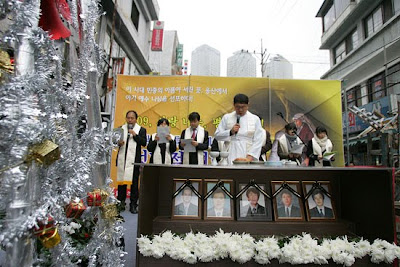 'Devotees praying for the prompt settlement of the ‘Yongsan Tragedy’, at the Holy Feast missal' 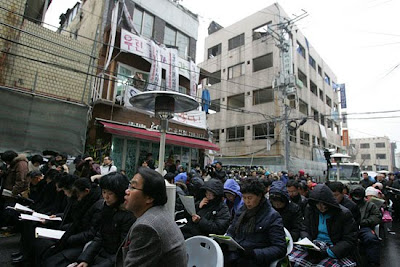 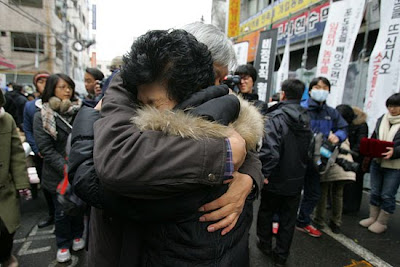 'Rev. Bang In Sung is hugging a member of the bereaved family of the Yongsan Tragedy.' 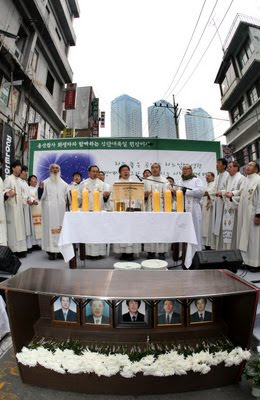 *Image source/ caption: Hankyoreh (same as the link below)

1,000 attend Christmas mass for Yongsan tragedy victims:
Lawmakers join the Catholic Priests’ Association for Justice in a special prayer for a resolution to this tragedy
Posted on Dec. 26, 2009

It’s Christmas. Rain falls at the scene of the Yongsan Tragedy in Hangangno 2-ga located in Seoul’s Yongsan neighborhood.

On this day, the Catholic Priests’ Association for Justice held a special mass for life and peace with the victims of the fire. The silent prayers of an estimated 1,000 people who braved the rain filled the alley next to the Namildang Building.

Portraits of individuals who were killed in the fire on Jan. 20 as they resisted evictions, demolition and subsequent police crackdown were placed next to the manger of the Baby Jesus. After mass, attendees sang “Silent Night” and laid flowers in front of the five portraits of Yang Hee-seong, Yun Yong-heon, Lee Sang-nim, Lee Seong-su and Han Dae-seong.

It does not seem possible that 340 days have passed. The color has begun to fade from the banners and signs that accompanied the lonely struggle. Yet the families of the victims, who sat in the first row of the mass, have not yet been able take off their mourning clothes.

The cloudy sky began sprinkling rain from the time the widow of Lee Seong-su, Kwon Myeong-suk, took the rostrum to greet the participants. Kwon said, “It seems the martyrs are sad, too, as on Christmas, which should be a time of congratulations and enjoyment, we would have eaten together had they been alive...” The bereaved families’ wiped their faces with wrinkled hand towels in response to her words.

Recent memorial masses for Yongsan victims have been attended by some several dozen people, but this Christmas mass at the site of the Yongsan tragedy gathered a crowd of close to 1,000. Former Democratic Party Chairman Sohn Hak-kyu, New Progressive Party Chairman Roh Hoe-chan, and independent Lawmaker Chung Dong-young and DP Lawmaker Song Young-gil took part in the mass.

Father Peter Lee Kang-suh, director of the Catholic Urban Poor Pastoral Committee of Seoul archdiocese, who performed the final prayers as the head of the day’s ceremony, asked, “Do you know why they place Baby Jesus in the manger?” Father Peter went on to say, “He was born in a manger because nobody else would take in even a pregnant woman since all the other houses were full of people. Some 2,000 years ago, the poor and powerless were unable to live in homes worthy of them and were driven out to live in the homes of beasts like today.”

Pressing the government to resolve the tragedy and to take an interest in the people, Father Lee said the Christmas mass was not the end. He also said that masses would be held every day at the Namildang Building until the tragedy is resolved. Since late March, the Catholic Priests' Association for Justice has hung up banners at the site and conducted memorial masses every day. In addition, Buddhist and Protestant human rights groups have also come to the site to spend time with the bereaved.

Despite their efforts, the situation appears far from finding a resolution. Prosecutors have chosen to only indict the protestors for their involvement in the events surrounding the Yongsan tragedy, and they have yet to release some 3,000 pages of notes dealing with their investigation of the police command's actions. On Oct. 28, the Court handed down heavy sentences of 5 years to 6 years each to seven of the nine former tenants, who were indicted despite the Court's instruction to prosecutors to hand over their notes.

Although winter has once again appeared on the streets, the hearts of the bereaved continue to burn just prior to the one-year anniversary of the tragedy. Kwon said the thing she is most afraid of is that this will all be forgotten as people are visiting the site of the Yongsan tragedy less in the heart of winter. The bodies of the victims are still awaiting proper funerals and when they might be released from the freezer of the morgue in Soon Chun Hyang University Hospital, nobody knows.

Posted by NO Base Stories of Korea at 5:13 PM