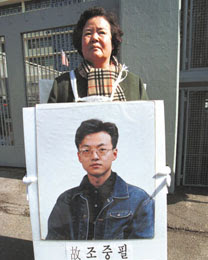 * Image source:
National Campaign for Eradication of Crimes by U.S. Troops in Korea

SEOUL — Prosecutors have reopened the investigation into a politically charged 1997 murder here and plan to seek extradition of a suspect in the case with ties to U.S. Forces Korea, Korean media outlets have reported.

The renewed interest in the case of a Korean man who was stabbed to death in a Burger King restaurant near Yongsan Garrison comes in the wake of the fall release of a popular movie — “The Case of Itaewon Homicide” — based on the killing and the systemic failures that eventually led to the release of the two suspects.

Some Koreans believe suspects with ties to the U.S. military receive favorable treatment in cases involving Korean victims. That has been the cause of occasional protests over the years in South Korea, where 28,500 American servicemembers are stationed.

In April 1997, 23-year-old university student Cho Chong-pil was stabbed repeatedly and killed in a Burger King bathroom in Itaewon, an entertainment district in Seoul popular with American servicemembers and other foreigners in South Korea. Two Americans — Arthur Patterson and Eddie Lee — were charged in the killing, which investigators at the time said appeared to be random and similar to a U.S. gang-style murder. The two suspects blamed each other for the fatal stabbing.

Lee, a Korean-American with no connections to USFK, was charged with murder and sentenced to life in prison. A higher court, however, reduced that sentence to 20 years and ultimately acquitted Lee for lack of evidence after he had served 18 months.

Patterson, the dependent of a contract worker for USFK, was charged with possessing a deadly weapon and destroying evidence. He was convicted and sentenced to 18 months, but was released from prison early in 1998 as part of the annual Aug. 15 liberation day amnesty granted by the South Korean government to some 2,000 convicts.

Prosecutors promised at the time to pursue the case further and perhaps file harsher charges against Patterson, but he was mistakenly allowed to leave South Korea.

A Seoul court in 2006 ordered the South Korean government to pay the victim’s family $34,000 for mistakes made in the handling of the case.

Then came the release of the movie. According to Yeon Hye-young, the marketing team leader for the film, it was inspired by the idea that “one of them, or both of them, surely killed an innocent person, but they were set free and walked away.”

“Rage, fury and sadness over the injustice about this cold case is another factor we want to talk about through the movie,” she said. “[It is] our hope that such an event must not happen again in our land.”

The movie was shown at about 200 theaters around South Korea upon its release.

This month, Korean media outlets reported that the foreign affairs division of the Seoul prosecutor’s office and the Ministry of Justice are seeking extradition of the 32-year-old Patterson from the U.S. government. Time is of the essence since there is a 15-year statute of limitations to prosecute such cases in South Korea.

Spokesmen for the prosecutor’s office and the Ministry of Justice refused to comment on the case when contacted by Stars and Stripes.

Murder case Mr. CHO Jung-pil in Burger King, Itaewon(April 3, 1997)
by National Campaign for Eradication of Crimes by U.S. Troops in Korea(Check English in the top right)
Posted by NO Base Stories of Korea at 4:27 PM