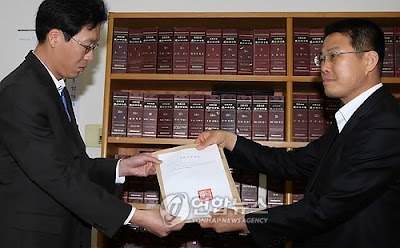 Yonhap News
Bill on troop dispatch to Afghanistan submitted to parliament
Dec. 11, SEOUL, South Korea -- Lt Col. Kwon Soon-woo, who is in charge of troop dispatches at the Defense Ministry, presents a bill requesting the dispatch of troops to Afghanistan in the National Assembly on Dec. 11. South Korea plans to deploy up to 350 troops to the war-ridden country for two and a half years to assist U.S.-led efforts to fight an insurgency and rebuild the Central Asian country. (Yonhap)
(END)
Posted by NO Base Stories of Korea at 1:29 AM