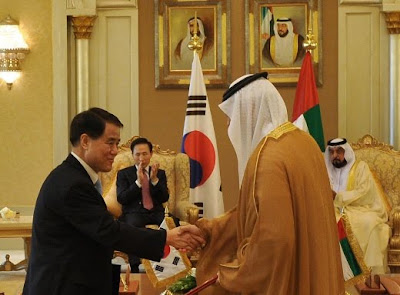 * Image source/ caption: Same as the link below

South Korea has picked up project rights for a 40 billion dollar (47 trillion Won) nuclear power plant project in the United Arab Emirates (UAE). The Emirates Nuclear Energy Corporation (ENEC) announced Sunday (local time) that a consortium led by the Korea Electric Power Corporation (KEPCO) was selected as the final contractor for the project. The KEPCO consoritium beat out France’s AREVA and a U.S. consortia led by General Electric Co. and the Japanese firm Hitachi Ltd.

The UAE project is the largest-scale overseas project order ever picked up by South Korea. The selection is further significant in that it marks the first exportation of South Korea’s independently developed nuclear power plant model APR. Environmental groups, meanwhile, continue to question the safety and utility of nuclear power plants.

The KEPCO consortium will begin work on the power plant next year in Sila, a city located 330 kilometers west of the UAE capital of Abu Dhabi. There will be four 1,400 MW-capacity plants at the location generating a total of 5,600 MW of power. Analysts say out of the 40 billion dollars, an estimated 20 billion dollars will go into design, construction and early operating expenses, while the remaining 20 billion dollars will go towards after service expenses for a period of 60 years after construction is completed for items such as plant fuel, operating costs, maintenance and waste treatment.

The primary factor in the selection of the South Korean nuclear power plant model, which has never been exported before, was its cost competitiveness. According to data from the Ministry of Knowledge Economy, the APR’s construction unit cost of 2,300 dollars per kilowatt (kW) was lower than those of its competitors AREVA at 2,900 dollars per kW, and GE at 3,583 dollars per kW. In terms of electricity generation unit cost, the South Korean model’s 3.03 cents per kilowatt hour (kWh) was lower than AREVA’s 3.93 cents kWh, and less than half Hitachi’s 6.86 cents kWh.

Questions about its utility and safety make nuclear power a controversial energy source throughout the world. The chief concern has to do with fatal damages that could result from radiation leakage in the event of an accident. For this reason, environment groups have maintained that nuclear power cannot be a fundamental alternative for combating climate change and that the construction of nuclear power plants should be minimized.

These arguments factor into the dark shadow lurking behind all the praise about the export of South Korea’s first nuclear power plant model. Environmental activists are noting that the dazzling copy about the largest power plant export in South Korea’s history masks continued concerns about environmental safety. In particular, they are pointing out that while the Lee administration is heralding a “nuclear power Renaissance” and talking up nuclear power as a green energy resource, safety concerns and other issues remain topics of debate within the international community. Indeed, nuclear power, unlike other renewal energy sources like wind and solar power, is not included in the Clean Development Mechanism (CDM), an instrument for greenhouse gas reductions included under article 12 of the Kyoto Protocol. Although countries like France and Japan place a high emphasis on nuclear power and have been arguing for its inclusion, no conclusion was reached on the matter at the recent climate change conference in Copenhagen.

Environmental activists are also claiming that the benefits of nuclear power plant construction as a future industry are questionable, since global demand for nuclear power plant construction is not very large and Korea still has not secured original technology. “There is a demand for new plants mainly in countries where civil society is not active, like China and countries in the Middle East, but there is no explosive demand at the worldwide level,” said Energy Justice Actions head Lee Heon-seok. “Also, because we still do not have the original technology, nuclear power plants lack future prospects in industry terms,” Lee noted.

Yanglee Won-young, head of Korean Federation for Environmental Movement’s committee on climate and energy, says, “Nuclear power may conceivably be a necessary temporary substitute for fossil fuels, but a better alternative would be to promote energy efficiency or develop renewable energy sources.” Yanglee added, “It is undesirable for South Korea to go all in on nuclear power.”