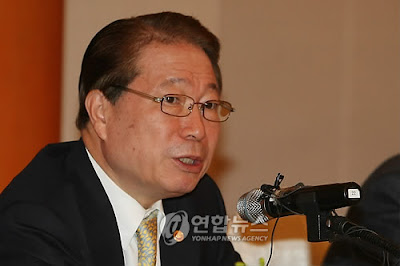 "(I am) aware that North Korea delivered its position to U.S. special envoy Stephen Bosworth, who traveled to the North from Dec. 8 to 10, that the U.N. sanctions on the country are unreasonable," Yu Myung-hwan, Seoul's foreign minister, said at a press conference.

North Korea launched what it claimed was a satellite-bearing long-range rocket in April, drawing international condemnation for what regional powers said was a disguised test of missile technology. While Pyongyang insisted the satellite successfully entered orbit, outside monitors say no such object had been detected in space.

Bosworth, a former U.S. ambassador to Seoul, made a three-day visit to Pyongyang last week, the first high-level contact with North Korea since the Obama administration took office in January.

He failed to obtain the North's commitment to return to the six-party talks, but said the participants "identified some common understandings" on the need to restart the multilateral forum. The talks have been deadlocked since the U.N. sanctions were imposed earlier this year following the North's nuclear and missile tests.

North Korea maintains that the rocket was launched as part of a "peaceful space program," Yu said, but the minister downplayed such claims.

"(The claim) is similar to its position arguing that the U.S. should drop its hostile policy towards the North before it returns to the six-party talks," said Yu, suggesting the remarks are part of the usual rhetoric put out by Pyongyang.

The minister "positively evaluated" Bosworth's trip to the North for "drawing out a common understanding" between Washington and Pyongyang over the need to maintain the six-party talks.

Yu also stated that other members of the talks were in unison over not rewarding the North for returning to the stalled dialogue, saying that the parties will continue to maintain a "two-track" strategy of sanctions and negotiations.

Bosworth's trip to Pyongyang had raised hopes for a breakthrough in the stalemate over denuclearizing North Korea, but he stressed the envoy held "exploratory talks, not negotiations" in Pyongyang.

* Related blogs
Posted by NO Base Stories of Korea at 7:47 PM