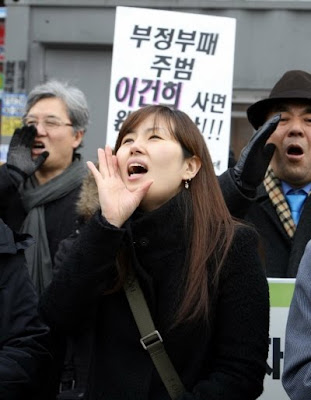 'Members of various civic organizations, including the Korean Confederation of Trade Unions, hold a demonstration in front of the Cheong Wa Dae (the presidential office in South Korea or Blue House) to urge President Lee Myung-bak not to pardon former Samsung Group Chairperson, Dec. 24. They call on President Lee to pardon prisoners of conscience instead.

It has been reported that President Lee may decide to announce a pardon for Lee Kun-hee despite public opposition sometime in January.


* Related article
Hankyoreh
[Analysis] Presidential pardon for former Samsung Group Chairman Lee Kun-hee appears imminent:
Observers say despite its law and order and pro-poor policies, the Lee administration may hand out pardons for several corporate figures by January
Posted on : Dec.24,2009 12:14 KST
Posted by NO Base Stories of Korea at 5:33 PM