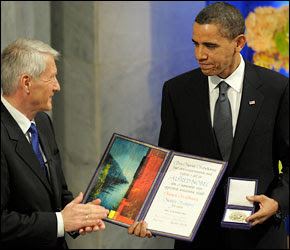 I tuned in for the last five minutes of the magician's acceptance speech for his No peace prize in Oslo. I felt better realizing that people were outside protesting the hypocrisy of awarding the peace prize to a president who had just unleashed a surge of more UAV's and 30,000 troops in war. Mostly civilians will be killed.

In his concluding remarks drone man quoted King and Gandhi and talked about love and "just peace". He mentioned hungry mothers and young women being persecuted by their government during peaceful protests.
Deep in his heart the magician knows he did not earn this prize. He knows it is just another part of the constructed public relations campaign to hide the western world's rape and pillage of the Middle East, Central Asia, and Africa for diminishing supplies of fossil fuels and rare and precious minerals - all needed to keep the capitalist industrial juggernaut grinding on for a few more years. The loss of lives are incidental to the need for control and maximum profit.
The wealthy class has exposed themselves with this No peace prize. They revealed their bankrupt vision of peace in order to provide cover for the magician's work of killing. They are in a desperate gamble of endless war and must use every available tool to cloak their war making in peace, religion, and sound morality.
I saw on TV last night that 66% of the American people do not believe that the magician has earned the peace prize. I imagine that the numbers are similar, if not greater, all over the world.
The peace prize will never carry the same luster with the public again. The shine on it has become dirty. It is now suspect as it should be. To award a peace prize to a man who is in the middle of a killing surge only darkens it beyond recognition.
There was no joy in the drone man's face as he received the prize. He knows he is a fraud and a product of illusion. He knows that his talk of peace, and the uttering of words of King and Gandhi, is blasphemy.
The crippled magician shall bring his prize home and will place it behind his desk so that photographs of him deliberating in his Oval office will constantly remind us of his uncanny ability to deceive. His slight of hand, like any magician, can woe a crowd but soon enough the public will grow tired of rabbits and long flowing scarves and coins from behind ears. These are not real replacements for jobs, health care, a clean environment, or true peace.
Eventually the people will wake up to the deeds of the magician. Today's No peace prize marks the final nail in the drone man's coffin.....and he knows it.
I almost feel sorry for the man....he has sold his soul to the devil for power and fame. But then I think of the children and old people he is now killing and my sympathy fades away.

* Related email from Enzo Ciscato(enzo@ciscatoitaly.com) thru. No US Bases

A group of No Dal Molin activists are in Oslo to present a message to President Obama,

to stand for Vicenza’s freedom and to ask for a future without military bases.

Check on the links below for aticles and video: