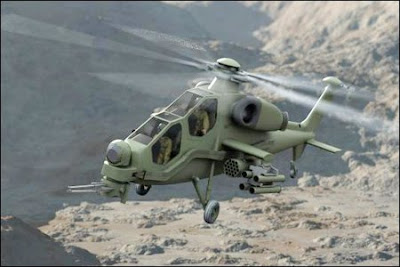 * Image source: same as the link below
'AgustaWestland is bidding for a contract to provide Korea with its T-129 attack helicopters.
The T-129, being developed for the Turkish Army, is an upgraded variant of the Agusta A129 Mangusta
/ Courtesy of AgustaWestland '
Korea Times
UK-Italy Firm Vying for Korean Attack Chopper Bids
By Jung Sung-ki
Korea Times Correspondent

VERGIATE, Italy ― It was a sunny autumn day and the "chop-chop" sound of the rotor blade of a helicopter was heard from the air. A blue and white helicopter was sinking out of the blue sky and approaching the ground.

"That's the helicopter for Samsung," Roberto Caprarella, a media relations official of AgustaWestland, an U.K.-Italy helicopter company, said Nov. 11 while leading a tour of a plant here, located about 45 kilometers northwest of Italy's northern city of Milan.

The helicopter was the first of the two AW139 medium-sized utility helicopters ordered by Samsung Techwin, a defense business arm of Samsung Group, the largest conglomerate in South Korea, Carprella said.

The helicopter, used to transport of Samsung VIPs and top executives, was there for pilot training before final delivery, he said. The other is to be delivered for the first quarter of next year.

The helicopter manufacturer believes the order from Samsung, the world's largest conglomerate, is very symbolic and will help further open the door for the commercial helicopter market in Korea.

"As you know, Samsung is leading commercial variants in Korea, so it's driving the requirements of others," an AgustaWestland official in charge of commercial marketing said, requesting not to be named. "If Samsung is flying the helicopter, others will follow suit. So we expect (Samsung's order) will finally open the door for the commercial market in Korea."

The helicopter firm is in discussions with several other Korean companies to sell its utility helicopters for VIP and corporate transport, the official said.

He expressed hope that his firm will provide utility helicopters to Korean TV broadcasting companies and the government for emergency medical service (EMS).

The standard AW139 configuration provides a 12-passenger seating capacity in a large, unobstructed cabin that offers ease of access and egress via large sliding cabin doors. The number of seats and other interior layout features can be modified in accordance with different missions ranging from offshore transport, search-and-rescue (SAR) and EMS, VIP and corporate transport to law enforcement and homeland security.

The twin-engine helicopter has a top cruising speed of 311 kilometers per hour and a maximum takeoff weight of 14,110 pounds. It has a maximum range of 1,250 kilometers and an endurance of nearly six hours.

Orders for nearly 440 AW139s have been placed by around 120 customers globally, according to the firm.

AgustaWestland helicopters have already been popular among Korean law-enforcement authorities. 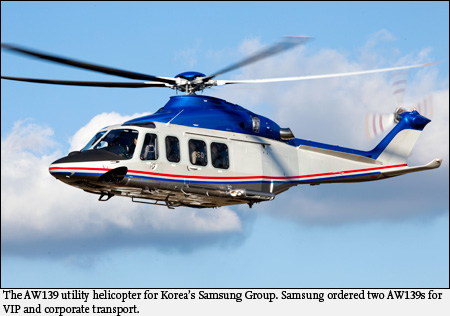 Earlier this year, an AW139 helicopter was delivered to the Gangwon Fire Fighting Department. In August, the National Police Agency (NPA) ordered an eight-seat single-engine AW119Ke. The NPA has been flying two AW190 helicopters since 1994.

On Dec. 10, two AW139 helicopters for search-and-rescue missions were delivered to the Korea Coast Guard (KCG), which is considering buying four more units.

The helicopters had been modified to KGC's operational requirements, which include a maximum speed of 304 kilometers per hour and an operational range of 819 kilometers. The KCG models have a seating capacity of 10 and are equipped with a long-range radar and thermal imager system.

Besides the Korean commercial market, AgustaWestland, owned by Italy's Finmeccanica, is ambitious about entering Korea's burgeoning military helicopter market, which will require more than 250 attack helicopters through the local development of the Korea Attack Helicopter (KAH) and the AH-X direct purchase plans.

It remains to be seen whether or not both programs will go ahead as originally planned due mainly to budget constraints. But informed sources say Seoul's Ministry of National Defense is in favor of keeping the two alive to create a high/low mix concept.

Both the AH-X and KAH programs are aimed at replacing the Army's aging 500MD TOWs and AH-1Ss. About half of the 500MD TOWs will reach their life span of 30 years by 2013, and AH-1S helicopters have also been operated more than 16 years.

Against that backdrop, the AH-X effort calls for buying 36 foreign heavy attack helicopters and the KAH plan requires building about 270 homegrown helicopters in partnership with a foreign manufacturer.

The Defense Acquisition Program is now reexamining the required operational capability (ROC) of the KAH, which had originally called for a light attack version, and is scheduled to finalize the requirements by March.

According to sources, the agency supports the development of a light-weight KAH.

"Regarding the KAH requirements, a consensus has been built among the DAPA, the Army and the JCS that it will be more feasible to keep both the AH-X and KAH programs,'' a military source told The Korea Times. ``The plan has already been reported to Defense Minister Kim Tae-young and presidential aides. It is awaiting approval from President Lee Myung-bak.''

For both the AH-X and KAH initiatives, AgustWestland is offering the T-129 version, currently under development for the Turkish Army. The T-129 is an upgraded variant of the Agusta A129 Mangusta. The T-129 development is led by Turkish Aerospace Industries (TAI), with AgustaWestland as the primary partner.

"It depends on the ROC for the KAH, but the T-129 model is very competitive both for the AH-X and KAH," said an AgustaWestland official in charge of marketing in Northeast Asia.

If South Korea buys T-129s for its AH-X needs, the T-129 platform will be used in developing a KAH with cost effectiveness for service, support and training, the official said.

The T-129 could also be retrofitted with Korean equipments developed for the KAH, he said.

Should South Korea select the T-129 for the KAH program, it would help Korea get easier access to the international collaborative program as well as reduce the estimated development time, costs and risks regarding the KAH, he noted, adding the T-129 will also ensure access to export market sales.

The first prototype of the T-129 made its successful first flight in September with four more prototypes scheduled to be built in 2010. Under a 2007 contract, the team of TAI, AgustaWestland and other local subcontractors will produce 50 T-129s with an option for a further 41 aircraft.

TAI is in charge of developing an indigenous mission computer, avionics, weapons systems, self-protection suites and the helmet-mounting cuing systems. Turkey has full marketing and intellectual property rights for the T-129 platform, and there are also no restrictions imposed on it for the export or transfer of the platform to other countries.

Powered by two LHTEC T800 engines, the T-129 has an operational range of 561 kilometers and can cruise at a speed of 269 kilometers per hour. It has a maximum takeoff weight of 11,023 pounds. Weapons systems will include UMTAS locally-developed anti-tank missiles, Stinger AA missiles, a 20mm canon and unguided rockets.

If the KAH's ROC calls for a light attack helicopter, the AW109 light utility helicopter would be a feasible platform, the official said.

"The AW109 offers a low cost alternative for the 'low concept' of the KAH," he said. Among the possible collaborative projects for the AW109 are the design-development of mission weapon systems-avionics, component/sub assembly manufacture, final assembly and in-service support, said the official.

The AW109 is a light-weight, twin engine multipurpose helicopter. It has a maximum speed of 285 kilometers per hour and a ferry range of 964 kilometers. The aircraft has a service ceiling of 5,974 meters. It has a maximum takeoff weight of 6,283 pounds.

Industrial sources here say possible cooperation between Korea and Turkey over the T-129 program, in particular, will help resolve an imbalance in defense procurement between the two governments.

During the Seoul International Aerospace & Defense Exhibition in October, Murad Bayar, undersecretary for defense industries of the Turkish Ministry of National Defense, raised this issue when he met his Korean counterpart DAPA Commissioner Byun Moo-keun, according to the sources.

"In a meeting with the DAPA commissioner, Bayar asked Korea to consider buying the T-129 or joining the Turkey-Italy helicopter program," an industry source said on condition of anonymity. "Byun responded he would review the option in a careful manner."

The DAPA, in fact, asked AgustaWestland to provide information on the T-129 for examination earlier this year, according to officials of the procurement agency.

The agency plans to begin exploratory development of the KAH next year with an investment of about 3 billion won ($2.6 million).

The T-129 is expected to compete with the refurbished Apache Longbow helicopters offered by the U.S. Army for the AH-X program. For the KAH, it would compete with Eurocopter, which is developing the Korea Utility Helicopter with Korea Aerospace Industries.