* Below is the unofficial translation of the summary of the article, Tongil News. All image sources are by Cho, Sung-Bong, in the same article. 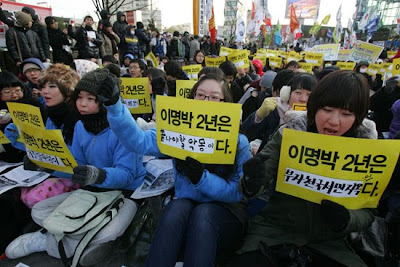 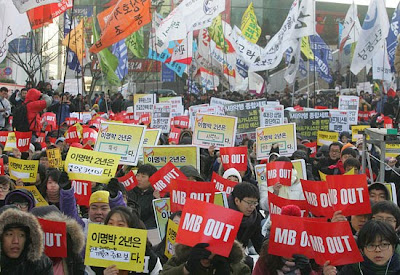 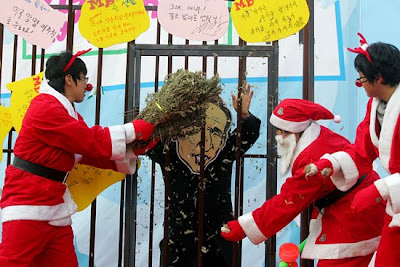 'In the performance, the participants are jailing the President, Lee Myung Bak, giving the ssok,
[traditional Korean vegetable] and garlic to him, in the sense that he should become the human being.'
[*The ssok and garlic are the foods that made a bear a human being in the myth of the birth of the oldest kingdom, Kochosun, in Korea]


'All Korea people’s rally for the realization of ‘Democracy! People’s welfare! And Anti-War & Peace!’ was held at the Seoul Station, at 3pm on Dec. 19. About 2000 people kept the site despite the severe coldness.

The rally was sponsored by the ‘Headquarter of the Joint Struggle Committee for the Judgment on Lee Myung Bak, Realization of Democracy and People’s Welfare’ (Unofficial translation). [After this, 'Anti-MB HJS'.]

The rally, participated by more than 230 organizations was held all throughout Korea.

In a statement, the participants saying that they, “gathered all the burning rage, upon the 2nd anniversary of the election of the Monster President who has collapsed the people’s living with the worst ways, destroyed the democracy without discretion and trampled down the [wishes of] peace & unification,” announced that they would actively [fight] for:

1.The prevention of the budget for the four-river project, and for the acquirement of people’s job/living/welfare
2. The deterrence for the vicious reformation of the labor law, and for the maintenance & strengthening of the democratic trade unions
3. The prevention of the dispatch to Afghanistan
4. The Abolishment of the vicious media law, and for the settlements of the Yongsan tragedy and rice price disaster
5. The deterrence of the passage of the [vicious] laws of anti-labor, anti-living and anti-peace, in a short cut way [in a conservative dominated congress]

Anti-MB HJS announced that they would hold the candle light culture event at the Yoido, [where the National Assembly is located] at 7pm, Dec. 23 to prevent the Grand Nation party to pass the [vicious] bills in the snatching ways. Following that, they added, “If the government, despite the people’s severe warnings, attempts to pass the bills in the snatching ways, the people, organizing the 48 hours national emergency action, would start the strong struggle”.

Posted by NO Base Stories of Korea at 8:21 PM