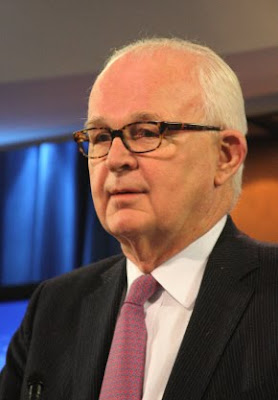 * Image source: same as the link below
'Steven Bosworth, U.S. special representative for North Korea policy.'
Hankyoreh
U.S. proposes “N. Korea-U.S. future vision” to Kim Jong-il through a letter from Barack Obama
: Stephen Bosworth says that the possibility of a peace treaty will be on the table during six-party talks in exchange for N. Korea’s abandonment of its nuclear program
Posted on : Dec.18, 2009 12:11 KST

In a State Department briefing Wednesday (local time), U.S. Special Representative for North Korea Policy Stephen Bosworth said that he “conveyed very directly to the North Korean leadership a vision for the future, which would be a lot different than the present or the past and ways in which we could improve both our bilateral relationship, provided that they are prepared to move toward the goal of denuclearization.” Analysts are interpreting this to mean that the gist of Obama’s letter is a promise of assistance for North Korea’s development in Northeast Asia and the international community through normalization of North Korea-U.S. relations and a guarantee of regime security, provided that North Korea returns to the six-party talks and pursues denuclearization through the implementation of the Sept. 19 Joint Statement.

Bosworth’s remarks at the press briefing were slightly different from his comments at a press conference in Seoul on Dec. 10, just after completing his North Korea visit from Dec. 8 through 10. The overall view among observers is that aside from the transmission of Obama’s letter, the U.S. government’s desire for a “denuclearized Korean Peninsula” was revealed in a slightly more forceful manner this time.

To begin, regarding the possibility of North Korea’s denuclearization, Bosworth said at the Wednesday briefing that “there is that prospect” and that “whether that actually happens or not depends upon the content and the results of the talks.” Analysts are interpreting this as an indication that North Korea did to some extent confirm its willingness to pursue denuclearization at the first North Korea-U.S. dialogue and that Bosworth was emphasizing the determination to pursue the denuclearization of the Korean Peninsula in the future through a policy of engagement.

Second, Bosworth stated that he communicated “a vision for the future, which would be a lot different than the present or the past” to the North Korean leadership as a way of eliciting North Korea’s denuclearization. While it is not yet known exactly what the content of the future vision was, observers are speculating that it may have been a “comprehensive package,” including elements such as the signing of a peace agreement, normalization of North Korea-U.S. diplomatic relations, normalization of relations with surrounding nations in Northeast Asia and economic aid as measures in response to denuclearization. Observers are also saying the content of Obama’s letter was likely along the same lines. U.S. Secretary of State Hillary Rodham Clinton’s comment on Dec. 12 that it “may be the time to exercise strategic patience” could also be interpreted to mean that a package was communicated to North Korea and that the U.S. is now awaiting North Korea’s strategic determination to abandon its nuclear program.

Third, Bosworth expressed his view on a peace agreement, which North Korea is raising as a core item on the agenda, in a slightly more specific and clear tone than during his Seoul press conference. Bosworth said Wednesday, “We talked about all of these issues.” Bosworth added, “We talked specifically about what kind of conditions would be necessary to move into a peace treaty negotiation, et cetera.” He also clearly indicated which parties would be involved in the discussions for a peace agreement, stating that “obviously” only North Korea and South Korea, the U.S. and China would be directly involved. This is an especially noteworthy statement, given that during his visits to South Korea, China, Japan and Russia immediately after his North Korea visit, Bosworth mentioned the issue of peace treaty above all else as the cost of getting North Korea to abandon its nuclear program.

Bosworth said that if the six-party talks resume, the biggest challenge is likely to be the issue of “sequencing.” He said this includes “the denuclearization, the move toward a new peace regime, a peace treaty, the provision of energy and economic assistance, normalization of relations and the establishment of some sort of a structure for Northeast Asian security.” Given the difficulty of adjusting and agreeing upon “sequencing,” analysts are saying the first set of talks between North Korea and the U.S. cleared only a small hill.

http://nobasestorieskorea.blogspot.com/2009/12/four-party-talks-no-re-dispatch-to.html
Tuesday, December 15, 2009
Four Party Talks! No Re-Dispatch to Afghanistan! No Illegal Defense Sharing Cost! And Returning Back of the Dongducheon USFK Base, Soon!

http://nobasestorieskorea.blogspot.com/2009/12/photos-fwd-spark-united-states-must.html
Monday, December 7, 2009
Activists Say, “United States Must Abolish the Hostile Policy against the North Korea, If She Wants the Denuclearization of North Korea”

Posted by NO Base Stories of Korea at 5:52 PM