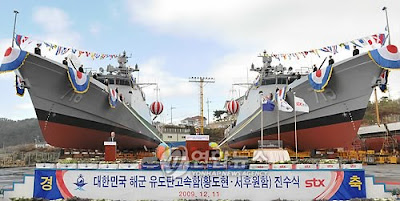 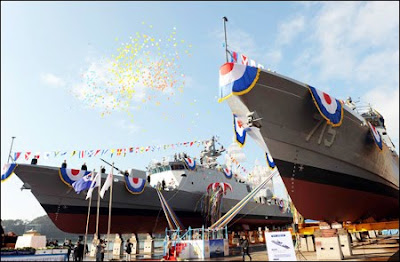 * Image source/caption: Korea Times, 12-11-2009 21:42
'Guided-missile ships: The fourth and fifth PKG (Patrol Killer, Guided Missile) class vessels sit at a shipyard of STX Offshore and Shipbuilding in Jinhae, South Gyeongsang Province, Friday. The Navy plans to build about 15 more PKGs by 2015 in a bid to upgrade its fleet of patrol ships. The 440-ton PKG can sail at a top speed of 40 knots and is equipped with domestically-built ship-to-ship guided missiles with a range of 140 kilometers. It also is fitted with 76mm and 40mm guns, and a radar-evading stealth function.'
Posted by NO Base Stories of Korea at 7:15 PM