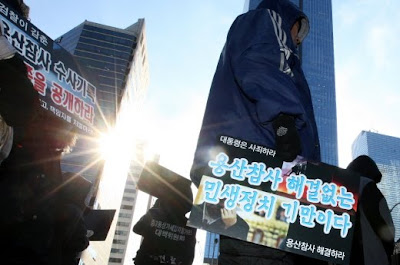 * Image source: same as the link below
Hankyoreh
Yongsan victims turn to redress from Samsung
Posted on : Dec.15,2009 11:23 KST

'Members of a pan-national committee on the Yongsan tragedy hold a demonstration to urge the government and the Samsung Group to come to a resolution, Dec. 14.

Members are faced towards the Samsung main building located near Seoul’s Gangnam subway station because the company is being partially-blamed for mobilizing the private demolition team and forced evictions as part of its plans to construct a new building at what became the site of the Yongsan tragedy that took the lives of five civilians and one police officer on Jan. 20.

http://nobasestorieskorea.blogspot.com/2009/08/text-fwd-amazing-day-in-korea.html
Saturday, August 15, 2009
[국문 번역][Text Fwd] AMAZING DAY IN KOREA
Posted by NO Base Stories of Korea at 7:07 PM