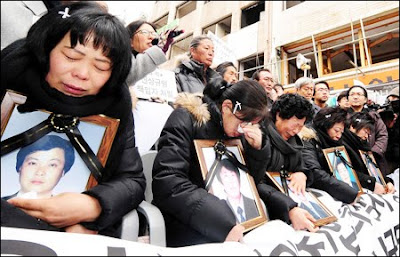 'Family members of five tenants killed during a police raid of a building designated for redevelopment last January hold a joint press conference at the site, Wednesday, after a settlement was reached with development companies over a compensation package. / Korea Times Photo by Bae Wu-han'
Korea Times
Yongsan Incident [half] Settled After 345 Days
By Kwon Mee-yoo
Staff Reporter
12-30-2009 18:16

An agreement was made Wednesday on a compensation package for the five tenants who were killed when police tried to forcibly evict them from a building, which was set to be demolished, in central Seoul in January.

The settlement came 345 days after the "Yongsan Disaster," named after the location of the building in Seoul. Families of the five victims have put off funerals demanding full-state compensation and an apology. One police officer was also killed during the operation.

The funeral for the victims will be held on Jan. 9. The "redevelopment committee," whose work has been held up for nearly a year, will bear the funeral expenses as well as provide compensation.

It was agreed that no civil or criminal lawsuits will be filed. A seven-member committee will be formed to implement the accord.

However, details of the agreement such as the amount of the settlement payment were not disclosed.

Civic groups claim that this disaster represents the Lee Myung-bak government's policy of promoting the interest of the affluent at the expense of the underprivileged. Thus, the settlement is expected to remove much of that stigma.

The settlement came through the mediation of Seoul City Mayor Oh Se-hoon.

"I am grateful to the religious leaders who assisted in the arbitration and citizens who watched over the incident," Seoul Mayor Oh said. "The city will proactively tackle problems in urban redevelopment in the future."

Following the agreement, Prime Minister Chung said the incident was a tragedy that should not have happened and the government will institutionalize mechanisms so as not to see a repeat of the tragedy.

Chung met representatives of the distraught families at the building where the incident took place and the families protested on Oct. 3, just four days after he was named the prime minister.

"The government has set up measures to reform redevelopment projects and we will improve housing security for the less-privileged," Chung said Wednesday.

The incident took place on Jan. 20 when some 40 tenants protested the redevelopment. On the rooftop of a four-story building, they clashed with riot police in a pre-dawn raid. A fire broke out during the clash and five evictees and a police officer were killed in the blaze.

The families of the deceased occupied the burnt building, demanding compensation and an apology from the state.

Prosecutors refused to disclose some 3,000 pages of investigation records that are believed to contain details of the clash between the tenants and police, alleging that only the tenants were guilty. In response, lawyers for the tenants quit.

[* The tenants and activists who were arrested on the day have gotten 5~6 year prison term and many involved in the protest against the eviction are still chased by the police.
In today's settlement, there was no provision on the matter. One of the issues still need to be solved. ]

Police officers who directed the operation on the night have either quit their jobs or been transferred to other positions. For instance, Kim Seok-ki, then-chief of the Seoul Metropolitan Police Agency and the commissioner general-designate of the National Police Agency, who approved the mobilization of a SWAT team, resigned.

meeyoo@koreatimes.co.kr
Posted by NO Base Stories of Korea at 1:53 AM