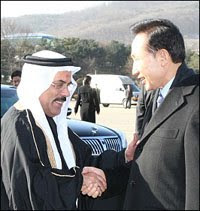 The summit diplomacy comes at a time when Abu Dhabi's choice of developer for a nuclear power plant is nearing, officials said. The President is to return home Sunday.

The presidential office said that Lee decided to visit the Middle East country as Abu Dhabi is scheduled to choose the developer this month.

Companies from four countries _ Korea, France, the United States and Japan _ have submitted bids for the project.

According to the presidential office, the Korean bidder is a consortium of the Korea Electric Power Corp., Hyundai Engineering and Construction, and Samsung C&T Corp.

[* Lee Myung-Bak was a Hyundai Engineering and Construction man before entering the politics, Click HERE.]

The office said the nuclear plant project is known to be large, but that the exact scale has yet to be confirmed.

It added that if Korea is chosen as the developer, its effect on the economy will be immense.

Since 1978 when the first commercial nuclear power plant was built in Korea, a total of 20 reactors have been introduced, providing almost 40 percent of the country's electricity.

Korea imports about 97 percent of its energy resources. Power generation through new nuclear facilities is expected to increase by 56 percent by 2020.

Since his inauguration early last year, Lee has called for ``green growth'' as a new growth strategy.

Nuclear energy produces virtually no emissions and as a result, few negative effects on the atmosphere. The government has considered it as the most suitable alternative energy source, given that it helps reduce green house gas emissions.

Lee Dong-kwan, senior presidential secretary for public affairs, told reporters that ``if Korea is chosen as the developer for the UAE project, it will mean the country's overall triumph in technology, diplomacy, and negotiations.''